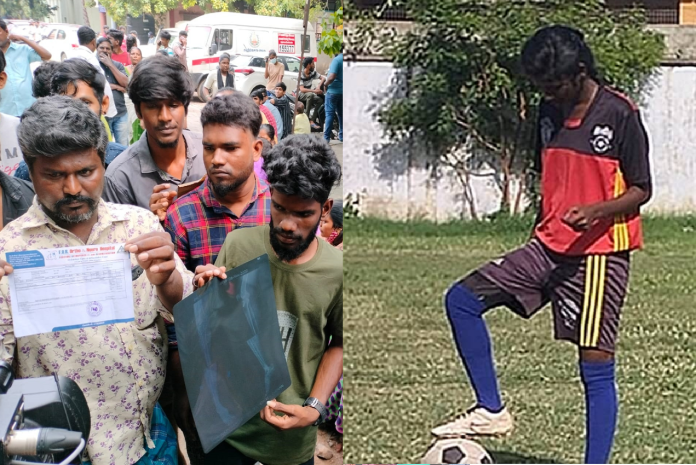 Chennai: A teenage footballer Priya R whose right leg was amputated in a botched surgery in a government hospital, died on Tuesday due to multiple organ failure.

The 17-year-old girl had arthroscopy surgery on November 7 at Periyar Nagar Government hospital in Chennai as she was having pain in her right ligament. After the surgery, Priya complained that she was experiencing pain in her leg but the doctors ignored her.

Priya was then shifted to Rajiv Gandhi Government General Hospital (RGGGH) when her situation started to worsen. She underwent two more surgeries on November 9 there.

A doctor from RGGGH informed that the muscle breakdown caused a spike in protein called myoglobin in the urine. This elevated creatinine levels resulting in renal failure. After which, her blood pressure dropped and liver and heart failed.

She was treated in the Intensive Unit Care but there was no improvement in her condition and she died early morning.

Meanwhile, the Tamil Nadu health minister Ma Subramanian has announced a compensation of Rs 10 lakh to the victim’s family and a government job to any of his brother.

“We will file a police complaint and initiate action for the careless post-surgical care,” the minister said.

Priya was a first year student of B.Sc Physical Education, and a resident of Vyasarpadi. Her father worked as a private security guard.

The family and friends of Priya protested against the hospital and demanded arrest of the accused doctors.