Redmi 11 Prime 5G set to launch on THIS date: Features, price and more 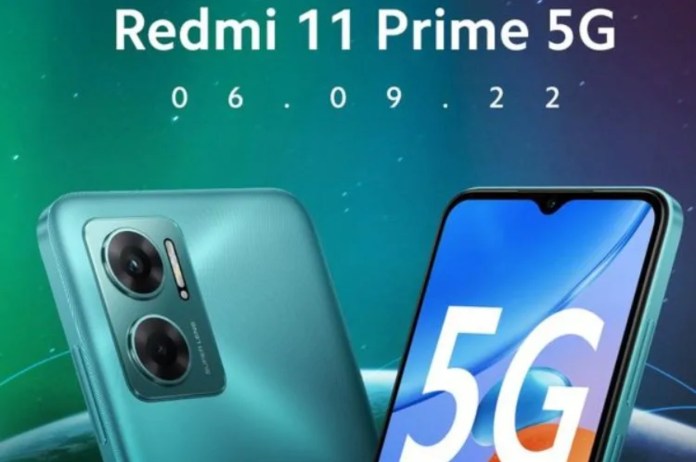 New Delhi: Redmi has officially announced to launch Redmi 11 Prime 5G on September 6. The Redmi 11 Prime 5G will be powered by a MediaTek Dimensity 700 SoC, and 5,000mAh battery. According to the microsite by Redmi, the smartphone will also feature a 50-megapixel primary camera, and provide dual-SIM 5G connectivity. It was previously spotted on the IMEI database.

The smartphone will spot a 50-megapixel dual rear camera setup with an LED flash. The right side of the device will feature the power button and volume rockers.

As per the reports, the phone will be launch in two colour shades. However, the company is yet to reveal other pricing and specifications. The right side of the device will feature the power button and volume rockers.

Redmi 11 Prime seems to have 6GB RAM and 128GB storage. The handset might feature a 6.58-inch full LCD full HD+ IPS display and will run on the latest Android version. The handset will further feature 18W fast charging too.

Considering the specifications, the phone will range under 20,000, at the same time, we have to wait for a week to know exact price set by the company.

The upcoming Redmi 11 Prime 5G smartphone is expected to be similar to the Redmi Note 11E 5G that exists in China. Xiaomi recently announced that it has shipped over 7 million 5G smartphones in India as of now.

The company is also preparing to launch more 5G service phones in India to give wide variety to their customer. Apart from this, Redmi is also planning to give some offers around Diwali.