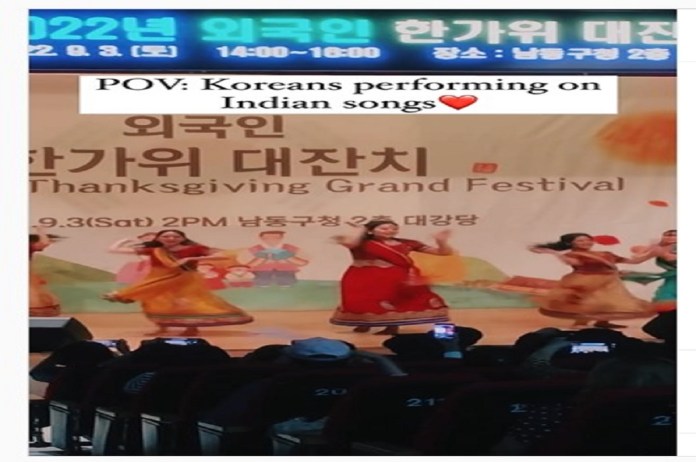 The video shared on the Instagram account lucknowi_nawab_in_korea shows participants dressed in traditional Indian attire performing to the songs ‘Nagada Sang Dhol’ and ‘Tattad Tattad’ from the 2013 film during their Thanksgiving festival on September 3.

In six days, the video received over 150K likes on Instagram and over 1.3 million views. The video is reportedly posted by an Indian digital creator on the social media platform.

The detailed caption informs the reader more about the event where the group danced.

“It is always great to see foreigners imbibing your culture. Thank you @ifsc_2022 for hosting this event. We enjoyed all the performances. This event was organized to pre celebrate Chuseok festival (Korean Thanksgiving festival). It is also called Hangavi which means mid autumn festival or harvest moon festival. It is a major mid-autumn harvest festival and a three-day holiday in South Korea celebrated on the 15th day of the 8th month of the lunar calendar on the full moon. Meanwhile did you notice that kid,” she posted.

The video left viewers amazed with the dance performance with one user saying “Amazing too good.” “Wow beautiful dancing and all are very talented,” said another user.