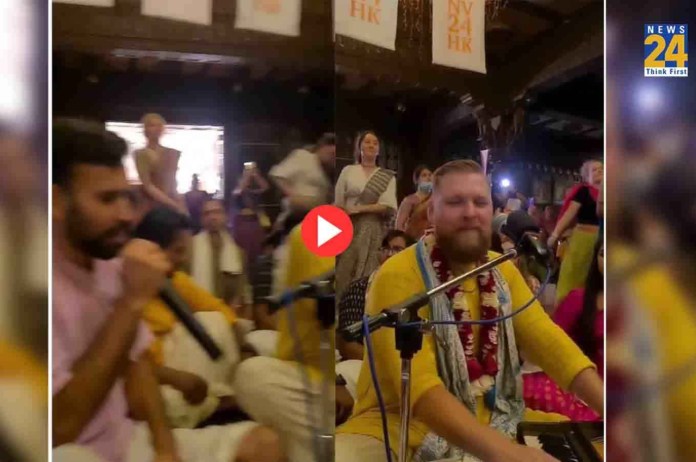 New Delhi: Needless to say, Lord Shri Krishna has countless devotees. There are several ISKCON temples in every state of the country dedicated to worshipping Lord Krishna and Radharani, where lakhs of devotees chant ‘Hare Rama, Hare Krishna’ day and night. These temples have been built not only in India, but also in other countries around the world where local devotees worship Lord Krishna. Now one such video is immensely viral on social media featuring a bunch of foreigners reciting ‘Hare Krishna-Hare Rama’ bhajan.

A post shared by Knowledge of Bhagavad Gita™ (@knowledge_of_bhagavad_gita)

The video shows a group of foreign devotees of Lord Krishna  chanting ‘Hare Rama, Hare Krishna’. An Instagram page called ‘Knowledge of Bhagavad Gita’, which has over 1.6m followers shared the video and wrote, “Those who are intelligent take advantage of the greatest yajña in this age by chanting the Hare Kṛṣṇa mahā-mantra in congregation.”

Needless to mention, the clip has gone viral, and Indians are praising foreigners for embracing Hinduism and worshipping Lord Krishna. “Power of Indian culture,” one user wrote, while another added, “This is soo soo good.”