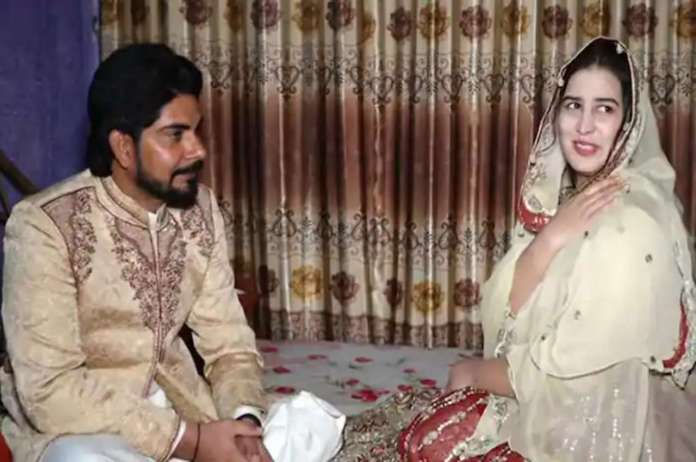 Every girl dreams of meeting a prince, but Rabia fell madly in love with a watchman named Shaukat. Rabia is a bank manager who was receiving rich marriage proposals, but she broke her heart while on the guard. Their love story is spreading like wildfire on social media. They have been married for 12 years, not one or two, and have two beautiful children. Let’s tell you Rabia and Shaukat’s love story.

Rabia explains that she was working as a manager in the bank. Shaukat was the night watchman. She used to listen to his voice all the time. She became discouraged by his voice. She could hear Shaukat’s pain in his voice. Not only that, but she admired Shaukat’s demeanour. He never raised his eyes to look at any girl. Then it was decided that if you want to love, you should do so with this person. She proposed to Shaukat one day after spotting an opportunity.

The expression of love astounded the watchman

At the same time, Shaukat claims that when Rabia expressed her love, his mind was filled with laddoos, but there was also fear. ‘Her voice was harsh. She seemed to be testing me in some way.’ Shaukat then took a two-day leave. ‘But I thought, if Allah has decided here, let’s try it and see what happens.’

Had to leave bank manager’s job

Rabia and Shaukat married soon after. There will undoubtedly be uproar if a bank manager insists on marrying a watchman. According to Rabia, the family members were very upset about this relationship. She had a lot of convincing to do.

‘Many marriage proposals were coming my way, but I told them that if I married, the husband would be my lover.’

Rabia’s Ammi agreed after much persuasion, and she persuaded the rest of the family. However, Rabia had to leave her job at the bank as people began making up stories.

The couple has two children

At the same time, Shaukat claims that when he told this in his home, people mistook it for a joke. They had no idea a bank manager would want to marry a watchman. Shaukat’s wedding had also been planned elsewhere. But he called off the wedding, and his family members supported him in doing so. They stated that as long as you are happy, we will be fine.

Rabia and Shaukat have been married for 12 years and have two children. Shaukat is a good husband, according to Rabia. ‘He helps me a lot and looks after me.’ At the same time, Shaukat lavishes praise on Rabia.

Teacher grooves with her students to Govinda’s ‘UP Wala Thumka’, video goes viral