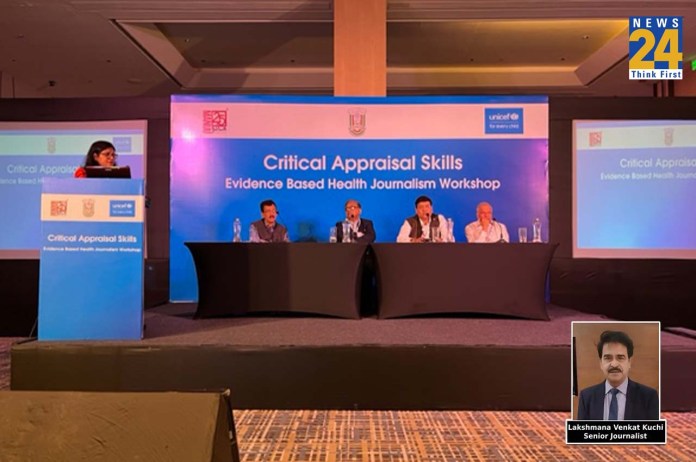 Just the other day Prime Minister Narendra Modi was cautioning the nation on the danger fake news posed to the country when briefing a gathering of home ministers of different states. A small piece of fake news can trigger huge chaos across the country, the Prime minister said on Friday in his virtual address cautioning the nation against ‘gun-toting and pen-wielding anti-nationals’ – those who peddle fake news. He emphasised the need to develop technologies that can check the spread of fake news and educate the people about the analyses and verification of information before they forward it to others.

Perhaps by sheer coincidence, on the same day in Dehradun, the capital city of Uttarakhand, former Prime Minister Dr Manmohan Singh’s media advisor and professionally acclaimed and awards-winning print, television and digital media journalist Pankaj Pachauri was educating a group of practising media professionals, journalism and mass media graduates and students pursuing Anthropology from across India on how to spot and bust fake news – killing the “news” at the inception stage itself.

Pachauri, a fake news buster himself as a working media professional was also part of a small team that began to prepare a comprehensive tool kit for identifying and stopping spread of fake news, way back in 2013. Multilateral development agency UNICEF took the initiative for this endeavour with the help of Oxford university that helped devise and design a course module on which other media professionals like Sanjay Abhigyan, former executive editor, Amar Ujala, veteran journalist Madhurendra Singh, former editor, Navbharat Times, Dr Muzaffar Hussain Ghazali, and other media academics were closely associated.

Taking the participants at the Critical Appraisal Skills Media Workshop on Health Journalism, organised by the UNICEF, through the basics of news, information, and the interplay between the two, Pachauri drew upon his nearly four decades of professional media experience, and more importantly as a fake news buster, said everyone must be careful not to spread information – by accident or by design — that is factually wrong as it will lead to unimaginable consequences.

Pauchauri, and other media experts and professionals, cited enough examples of rumours, incorrect information and fake news that did the rounds during the Covid 19 pandemic and how challenging it was to fight the medical disease and more importantly, the disease of fake news, spread by accident and design both.

If enough care is taken as information is processed into news – by fact checking, authenticating sources and sourcing and evaluating the motive of the information and then contextualising it – chances of killing the fake news are very high, Pachauri said and added, “these days with social media turning anyone and everyone into a journalist, the tools of checking misinformation and detecting fake news must be shared with all people, and educating them how to use them.”

When devising this module with the help of Oxford university that already had been working on aspects relating to fake news, the UNICEF initiative decided to apply fake news busting tools to health journalism as misinformation, fake news, vaccine hesitancy arising out of rumours, and over the years has come out with a specific module that is being taught at reputed media institutes like IIMC and few other universities.

Pachauri crystallised and summarised the work of nearly a decade into a single slide containing a small fact-check checklist – of just five steps. Identifying original source, verify the content, check for context, obtain permission, and set out evidence for the reader (citations) are the steps one ought to go through to process the news that is fit to print.

One can start with checking who wrote the article, and then proceed with other questions what the publication is, where do the sources inside come from, when was it published, why did the writer create it (motive) and most important, how did the write up make you feel. Answers to these will determine whether the news is factually correct and can be disseminated, Pachauri said.

The fact-check and fake news busting module is a dynamic in its course content, and newer elements keep getting added as one goes along.

Critical Appraisal Skill (CAS) is the capability of carefully and systematically examining research / data / claims to judge its trustworthiness, and its value and relevance in a particular context. CAS helps in making sense of scientific evidence. It has produced appraisal check lists covering validity, result and relevance.

Like the ten-point Media Rating Tool presented by Sanjay Abhigyan that contains a list of ten questions that a journalist or a person forwarding information should keep in mind, to detect and check fake news from circulating.

The most important thing, Abhigyan said, was to check if the story avoided disease and scare mongering – which is the most crucial element in fighting fake news in the context of health journalism. It is very important, because fake news in health-related aspects can be dangerous and lead to avoidable deaths, like it happened in some instances. Also, could lead to vaccine hesitancy that eventually takes its own toll, like it did in the highly developed USA as well.

Other than basic cannons of good journalism and the conventional 5 Ws and 1 H, the Media Rating Tool also has questions to check if there was any conflict of interest involved and if it was resolved, is the scientific evidence mentioned prominently, economic aspects relating to story mentioned, does the story describe alterative options available, are independent sources of information consulted and mentioned and finally, and is the story relevant to local settings.

Often, journalists in a hurry might be forced to skip a few steps. But like Sanjay Abhigyan said, it is better to miss a story than to run with an incorrect and fake story. And with people in general behaving like journalists, without the gatekeepers in the vicinity, it becomes even more important to create awareness on this fake news busting module among the masses as well.

Earlier Zafrin Chowdhury, Chief of Communication, Advocacy and Partnerships, UNICEF India, said that the idea behind the initiative for developing CAS and apply it to health journalism in India was to enable well informed and balanced reporting on health issues, especially those relating to women and children. The UNICEF also promotes routine immunisation and is focused on zero dose children, those who missed routine vaccination because of Covid, whose number is some three million in India.

The initiative that began in 2014 has covered 100 media organisations, 10 media institutes and over 5000 journalists so far.

And as Pachauri said, “It is still work in progress, given the huge challenge that confronts a sub-continent like ours.”