Queen Elizabeth II Funeral: Here is the list of events for queen’s funeral 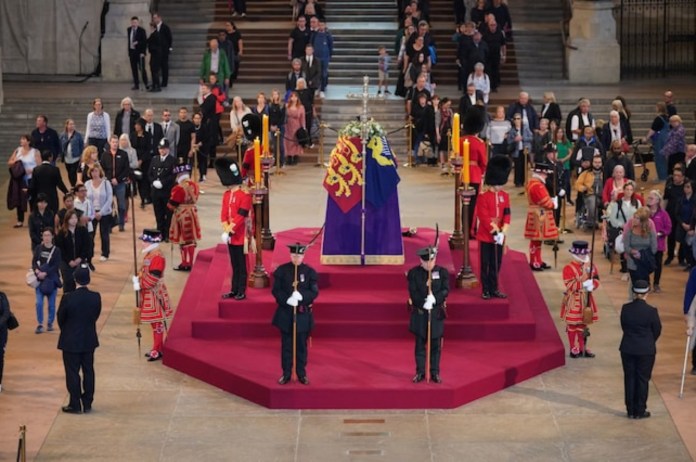 London: The official timetable for Monday, September 19’s state funeral for Queen Elizabeth II has been made public by Buckingham Palace. Regarding preparations for the funeral processions in London and Windsor, the UK government is expected to issue its own instructions.

Nearly 500 world leaders including Droupadi Murmu and US President Joe Biden will be among the top dignitaries who will attend queen Elizabeth II’s funeral ceremony at Westminster Abbey.

The funeral is scheduled to start at 11 am UK time which is 3.30 (IST) and will conclude with a two-minute silence around the country an hour later.

Here is the full list of events for queen’s funeral

11 am (IST) The queen’s lying-in-state will end, which is also an opportunity for the public to respects to the late monarchy. Preparations for the Westminster Abbey service will start from here.

12:30 pm (IST) The doors of Westminster Abbey will be opened for the guests to take their seats.

3 pm (IST) The coffin will be taken from the hall to the State Gun Carriage of the Royal Navy.

3:30 pm (IST) The funeral will begin which will be conducted by Dean of Westminster.

4:30 pm (IST) The service will end here. And the coffin of queen will be followed by King Charles III, the Queen Consort, the Prince and Princess of Wales and members of the Royal Family who will walk in this procession to Wellington Arch.

4:45 pm (IST) The procession will start for Wellington Arch with the route lined by the Armed Forces from Westminster Abbey to the top of Constitution Hill at the Commonwealth Memorial Gates. Then, the king’s Troop, Royal Horse Artillery will see the departure of the coffin of queen to Windsor.

8:30 pm (IST) The Committal Service will take place this time. The king and the Royal Family will leave Galilee Porch for Windsor Castle.

12 pm (IST) Around this time, a private burial service will be performed by the Dean of Windsor which will be attended by the King and members of Royal Family. Queen Elizabeth II will be buried together with her late husband, The Duke of Edinburgh, at the King George VI Memorial Chapel. The queen had requested the performance of the Sovereign’s piper before she is buried.