Mourners moved as queen’s grandchildren stood vigil at her coffin 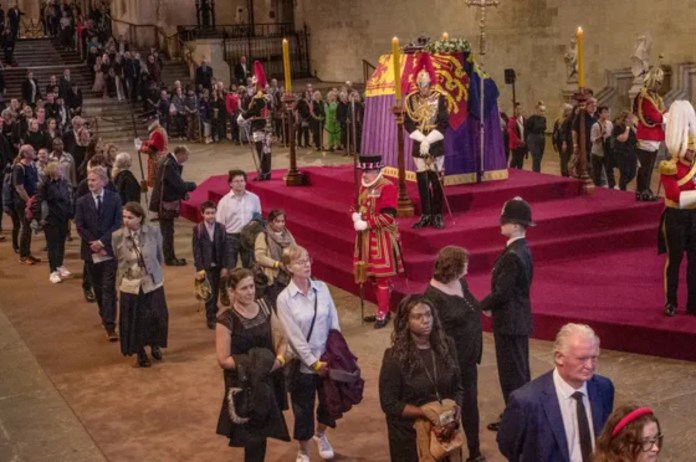 New Delhi: Mourners in London said they were moved as Queen Elizabeth’s grandchildren stood vigil at her coffin on Saturday.

Hundreds of thousands of people have poured past the late British monarch as she lies in state, and on Sunday, U.S. President Joe Biden is anticipated to pay respects at the casket of Queen Elizabeth in London.

Prior to Monday’s elaborate state burial for Elizabeth, Biden will attend a reception alongside King Charles and a large group of other international leaders and royals.

Since Wednesday, Elizabeth’s body has been lying in state at the revered Westminster Hall. People from all walks of life and all corners of the globe have been passing by in a never-ending, tearful line, many of whom waited overnight.

“Her legacy will loom large in the pages of British history, and in the story of our world,” Biden said in a message following news of the queen’s death on Sept. 8 at the age of 96.

Elizabeth met all but Lyndon Johnson of the 14 American presidents who served during her reign, beginning with Harry Truman in 1951 while she was still a princess. View More

“The sheer silence of that space is one of the things that makes it so moving,” Arden said, adding that she had shared the moment with people who had queued for 20 hours or longer.

In the 10 days since Elizabeth’s passing, Britain has held a number of sombre, meticulously organised rituals, reflecting the customs and spectacle of the British royal family, whose ancestry dates back almost 1,000 years.