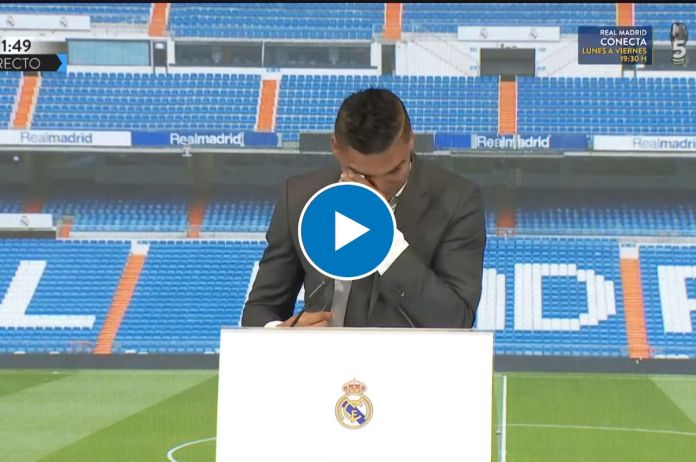 New Delhi: Brazilian midfielder Casemiro wept on Monday as he made an emotional farewell to Real Madrid following a nine-year stay with the La Liga club.

The 30-year-old said, “When I got here, my wife and I knew nobody. We were alone and we built our life story here in this city together. I arrived at the reserve team and I had to fight my way to the first team. I learned the values of this club while working at their academy, to be the purest part of football. I have won a lot here, but I’ve always felt that the greatest honor was to come here to work every day.”

Manchester United have paid Real Madrid an initial £60m plus £10m in add-ons for Casemiro, who has signed a four-year contract with the option of a further 12 months extension at Old Trafford.

The Brazil international has won three La Liga, one Copa del Rey, and five Champions League titles among many other accolades. Casemiro gave special thanks to teammates Luka Modric and Tony Kroos for their support. The trio became known as “KCM”.

Real Madrid president Florentino Perez praised Casemiro by saying, “You have been exemplary every single day in all of these years here. You have earned the right to decide your future and we must respect it. You… leave the image of the champion that you are.”

“You are going to a friendly club, the legendary Manchester United, but wherever you are, you will always be an ambassador of Real Madrid. “You will always be one of us… Thank you, Case, this is and always will be your home,” he added.

The £70m singing will be joining his international teammates Fred and Alex Telles. While Casemiro is “excited” about reuniting with former Madrid teammate Cristiano Ronaldo and Raphaël Varane.

“The Premier League is a competition I’ve always liked and always wanted to play in. I want to face new challenges, know a different league, a different country, different culture. I’m excited about what’s ahead of me. It’s true that they (United) are not in the Champions League right now, but I’m excited. I haven’t spoken with Cristiano Ronaldo yet, but I’m excited to play with him again. I’m so keen to get started, with the biggest club in England.”

“I hope Cristiano stays, I want to play with him again, he’s incredible,” he added.