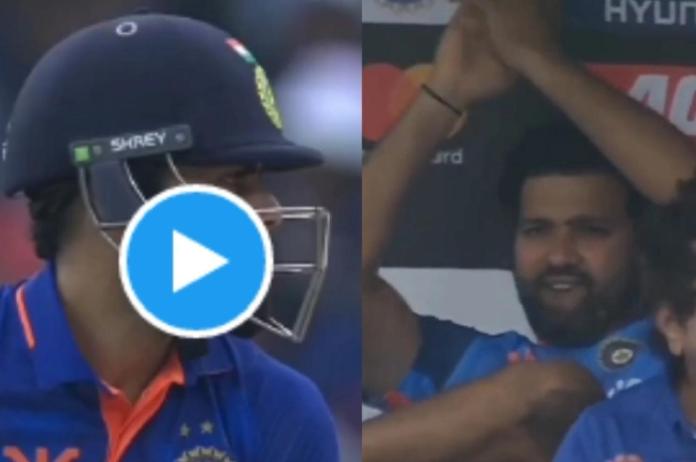 New Delhi: In the third and last One Day International (ODI) 2023 match between India and Sri Lanka, Virat Kohli scores a century and it was ‘delightful’ to watch Rohit Sharma celebrating the moment.

Virat Kohli has hit another century of the ODI 2023, making his fans wooed. However, there was someone else who was seen enjoying Virat Kohli’s knock against Sri Lankan player Lahiru Kumara’s ball. Kohli hit 13 fours and 8 sixes in his 110-ball innings.

Virat Kohli was on strike in the last over of India’s innings. He was looking to score quick runs. Kohli hit Kumara’s first ball for a six. A different ball got dotted. Single from Virat on the third ball.

On the fourth ball of the over, Akshar Patel stole a run by playing towards the log off. Kohli was on strike now, Kumara bowled a shot to Kohli, on which Virat Kohli hit a pull shot.

The ball goes over mid-wicket for a six. Seeing this shot, Rohit Sharma looked happy sitting in the dugout. He was praising this shot of Virat while clapping.

This shot of Virat Kohli will have a separate fanbase https://t.co/cX4HqDAPXq

Sachin’s record is sure to be broken

Seeing the Virat’s stormy style, it seems like Sachin Tendulkar’s great record will break this year. Sachin holds the record of 50 centuries in ODIs. Virat has scored 46 centuries.

Team India will play most of the ODIs before the World Cup this year. After Sri Lanka, New Zealand, Australia, West Indies and then the Asia Cup which will give the King Kohli enough time to break Sachin’s record of 49 centuries. The 50-over World Cup is also to be played in India from October.

Most hundreds for India in ODIs

Most centuries in international cricket