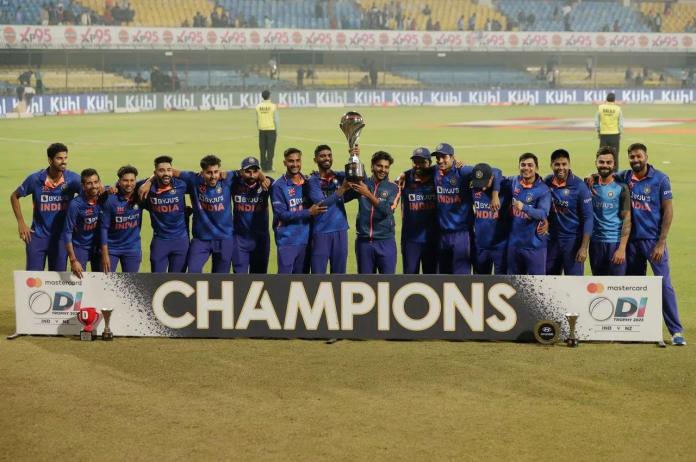 New Delhi: Team India has claimed the top spot in the Men’s One Day International (ODI) rankings after they whitewashed New Zealand by 3-0 in the last ODI at Holkar Stadium in Indore.

India is riding on centuries of skipper Rohit Sharma and opener Shubman Gill along with the late strike from Hardik Pandya and Shardul Thakur, helping India to put up a daunting total of 395 off 9 wickets.

With the 90-runs win over blackcaps, India toppled the England and New Zealand to capture the top position of the 50-over format. Ahead of the World Cup, scheduled in October and November, Men in Blue looks favourite to lift the title that will be hosted in the subcontinent.

It seems like team India has finally found therhythm as both of the openers scored century. Captain Rohit Sharma ended his century drought after three years. He scored his last hundred in January 2020. Shubman Gill scored 4th century and both put up the massive total of 395 runs.

Read More :-INDIA VS NEW ZEALAND: MAJOR SETBACK FOR INDIA AS THIS STAR PLAYER RULED OUT OF T20 SERIES

Team India reached the top position in the Men’s ODI ranking. India was on third position behind England and New Zealand but tied the rating. However, because of playing more number of matches, India remained on the third position. But with the whitewash against the New Zealand helped India to go through.