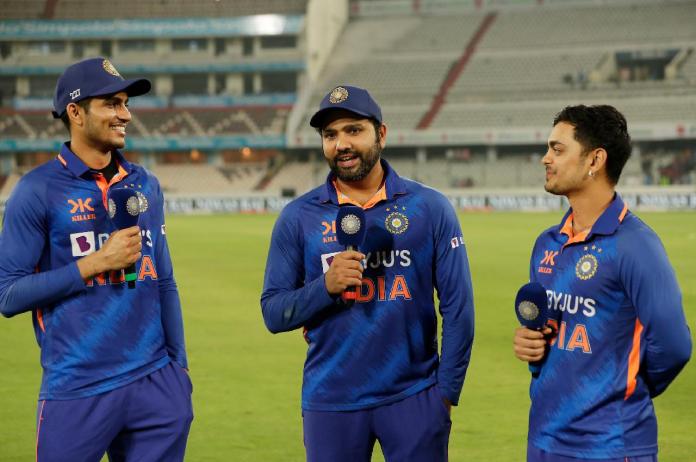 New Delhi: Indian batter Shubman Gill scored a double ton in the first match of the One Day International (ODI) series at the Rajiv Gandhi Stadium in Hyderabad, breaking several records at a time.

With this, the Indian cricket team captain Rohit Sharma welcomed Shubman Gill in the “200-club”. In an interview with Gill, Rohit Sharma praise the Indian player for his outstanding performance at the game against New Zealand.

India clinched a thrilling 12 runs victory over the team of New Zealand as the Men-in-Blue won the match.

Meanwhile, Shubman Gill became the 8th player and fifth Indian, who achieved 200 runs feet in 50-over format. Sachin Tendulkar was the player who slammed double hundred in ODI. Rohit Sharma hold the record of highest individual score in ODI, he scored 264 against Sri Lanka.

Expect a lot of fun, banter & insights when captain @ImRo45, @ishankishan51 & @ShubmanGill bond over the microphone 🎤 😀 – By @ameyatilak

During the conversation, Ishan questioned Gill what is his pre-match routine. To which, Gill replied by saying that “You (Ishan) do not let me sleep.” He said Ishan watches movies on his I-Pod without earphones.

After this, Rohit congratulated Gill for his double hundred and welcomed him to the ”200-club”. Meanwhile, Ishan also praised the Hyderabad hero and said, “Well done brother, very well done.”

Why Ishan was not included in squad for Sri Lanka series: Rohit

Captain Rohit Sharma asked Ishan Kishan why he was not included in the playing 11 despite scoring a double ton against Bangladesh. To which, Kishan quickly replied, “You tell me, you are the captain.”

Ishan Kishan was benched for three matches of ODI series against Sri Lanka. He was included in the playing 11 against New Zealand as wicket keeper batsman K L Rahul was not available.