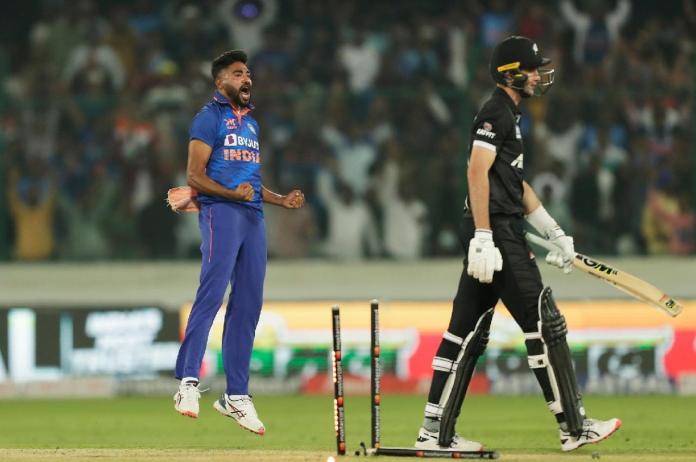 New Delhi: Mother of Indian Pacer Mohammed Siraj, Shabana Begum exuded pride in her son saying that he “continue to shine for India.” This comes after the Indian Pacer picked up four wickets against New Zealand in 1st One Day International (ODI) 2023.

Siraj’s mother Shabana Begum in conversation with BCCI said, ”I would like to thank Allah and hope that Siraj can continue to shine for India. Hopefully, he can continue his performances and make it into the World Cup squad.”

The Rajiv Gandhi International Stadium is a place where Siraj dreamed of playing for the Indian cricket team. Mohammed Siraj was the center of attraction at the stadium while standing fiercely against the team of New Zeland.

The pacer delivered match-winning performance when he picked up 4 wickets for 46 runs in his 10-overs, against New Zealand in 1st One Day match of 3 match series.

A perfect and eventful day for @mdsirajofficial, who played his first international game at his home ground and had his family watching him sparkle for #TeamIndia with the ball 👏🏾👏🏾

Watch as his friends and family share their thoughts 🤗 #INDvNZ pic.twitter.com/AXPVWbxs9z

Indian skipper Rohit Sharma praised Siraj for his focus and dedication towards the game while also appriciating the latter’s hard work to improve his bowling.

”Over the last couple of years, we have seen how well Siraj has fared across all three formats. He has improved his bowling; his line and length have improved. He has especially worked on his outswing,” Rohit Sharma said at post match conference.

Sharma said that Siraj was not that renowned for swing, but he has shown his ability to swing with the new ball over the last series.

”It is not an easy task for any batsman to face the new ball. Siraj has started understanding his bowling and what the team wants from him. Overall he has become a very good bowler for the team, one who can take wickets with the new ball and in the middle overs. He has also improved his death bowling with the IPL,” Rohit added.

”We have to keep in mind that we manage him well, and keep him fresh till the World Cup and for the four Tests against Australia,” Rohit concluded.

Middle stump out of the ground 👌