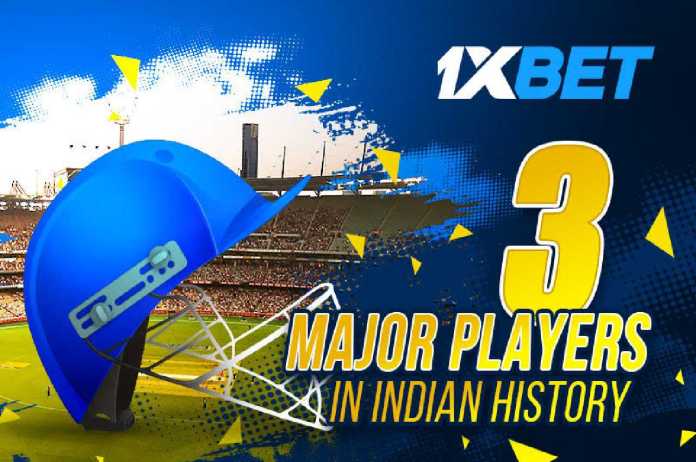 India is one of the richest countries in the world in terms of natural resources. There are minerals here, as well as varied nature. But the main thing is that wonderful, hard-working people live here who love and know how to achieve success. And one of the fastest ways to such success, a genuine social upliftment, is the game of cricket – the most popular sport in the country.

We’d like to tell you the stories of three players who are among the most successful in the history of Indian cricket. Perhaps they will inspire some of you to break through to success with 1xBet just like these heroes did.

Known as Dada (“elder brother’), this superstar will forever be a fan favourite. Older brothers are very often examples and role models for others. And in this regard, the nickname was perfect for one of the greatest captains in cricket history. Ganguly, also known as the “God of the Off Side”, rose to the occasion time and again to help his team seize victory.

Ganguly was left-handed and used this as an advantage. Confronting him was a real torment for any opponent. Interestingly, he rose to the status of one of the most beloved players in history despite being regarded as arrogant in his youth. But Sourav simply always knew his true value and stood up for his teammates like a mountain – that’s why others loved to play with him. So it’s not surprising that after the end of his career, he rose to become the president of the Board of Control for Cricket in India.

The man aptly nicknamed “The Wall” had legendary defensive talents. One of the best batsmen in the game’s history began playing cricket at only 12 years old but surprisingly quickly impressed others with his abilities. Amazingly, he managed not only to become a cricket star in his youth but also to receive an MBA. Truly, some talented people have no limits!

Dravid was Ganguly’s companion in the heyday of the Indian national team in international competitions. So it’s not surprising that Rahul was entrusted with the title of captain when Sourav couldn’t compete. With an astounding five double centuries to his name, this is one cricketer that will forever be remembered as a true champion.

Once Maria Sharapova joked unsuccessfully, saying that she didn’t know who Sachin was. It cost the Russian tennis player a flurry of angry comments from cricket fans. After all, just like Michael Jordan in basketball, Pele in football or Federer in tennis, Tendulkar in cricket is a true symbol of his sport. In fact, it was Sachin who showed how brightly the stars can shine in this game.

An athlete who, at the age of 16, shone in matches against Pakistan went on to represent India in international competitions for 22 years in a row. He was the first player in history to have 100 centuries and 30 thousand runs in international matches. The list of his records will stretch for many pages, but his nickname “God of Cricket” more eloquently summarises his legacy than any statistics.

If you follow cricket, if you know all about its stars, and if you’re ready to use your knowledge of cricket, then 1xBet is your top choice. It’s the company that offers great odds on the main sport in India. So place your bets at 1xBet – and perhaps one day you will be as famous as these cricket stars!

Disclaimer: This is a propelled article. News24 does not endorse betting or gambling in any form, may it be digital or physical. Play on your own risk and wisdom.