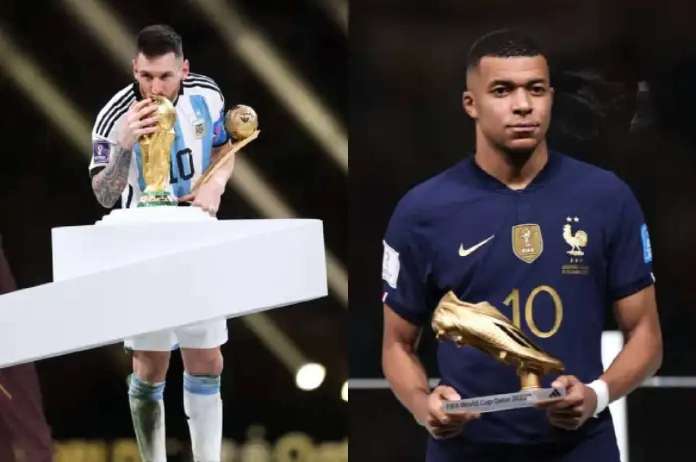 FIFA World Cup 2022, Argentina vs France: Argentina defeated France in the FIFA World Cup 2022 final in Qatar to win the title and become the world champions for the third time. France was defeated 4-2 in a penalty shootout after a nail-biting thriller in which both teams gave their best. Mbappe, France’s star player, scored a hat-trick in the game, but his team was unable to win the cup. In this World Cup, he scored eight goals. Argentina’s great footballer Messi was awarded the Golden Ball. Messi scored seven goals at this year’s World Cup.

The Golden Boot is given to the player who scored the most goals in the FIFA World Cup. At the same time, the tournament’s impact player is awarded the Golden Ball. Mbappé has eight goals in this world cup, while Messi had seven.

Mbappé made history by scoring a hat-trick in the 118th minute of this match versus Argentina. He became the world’s second player to score a hat-trick in a FIFA World Cup final. He scored all three of France’s goals in the 80th (penalty), 81st, and 118th (penalty) minutes. Despite this, Mbappe was unable to lead his team to victory. Lionel Messi scored two goals in the game. The game saw a total of six goals scored.

Despite all of his achievements, Messi did not have the World Cup trophy in his cabinet until now, which he has made up for. Lionel Messi’s dream of winning the World Cup has come true. Argentina defeated France 4-2 on penalties in the FIFA World Cup final on Sunday. Both teams were tied at 2-2 after 90 minutes of play. After extra time, the score was 3-3. Following that, the verdict was reached through a penalty shootout.