Erling Haaland scored a half hat-trick while his fellow summer signing Julian Alvarez bagged a brace as the champions beat Nottingham Forest. 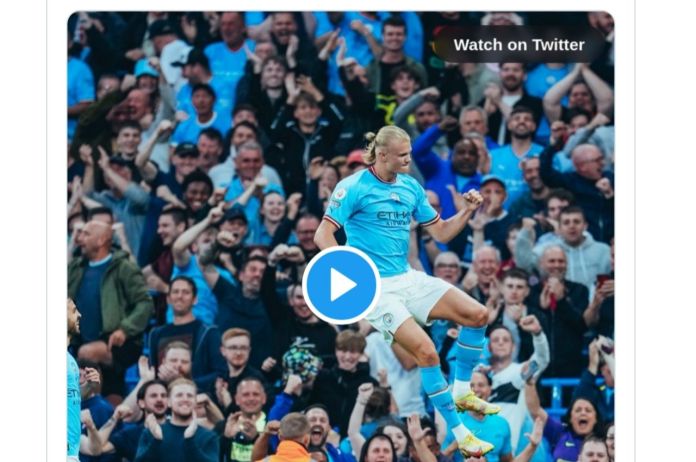 New Delhi: Erling Haaland scored a half hat-trick while his fellow summer signing Julian Alvarez bagged a brace as the champions beat Nottingham Forest on September 1.

Haaland has become the first player to score nine goals in his first five Premier League games. The 22-year-old is the first player to score nine times in the month of August. The Norwegian is currently scoring 1.8 goals per game, more than double that record-breaking rate. He is on course to score 68. Mohamed Salah’s 2017-18 is the best on a scoring rate basis, his 32 goals working out at 0.84 per game.

Nottingham Forest manager, Steve Cooper was asked if he had ever come across a center-forward like him. “No, if that’s the case, what you just said” Cooper replied. “The facts state that.”

The goal that sealed a second hat-trick in two matches! ⚽⚽⚽@ErlingHaaland | #ManCity pic.twitter.com/qE6tyYPVk5

“Man City have the best striker in the world right now. If he stays in the Premier League, every record will be broken.”

Manchester City manager, Pep Guardiola has told the media how Erling can be stopped.

Also Read :- Bangladesh vs Sri Lanka: who will qualify from Group B in Super 4 of Asia Cup 2022

Guardiola says the Norwegian can become a club great.

“Sergio is the legend. Nobody can break the position in the hearts of City fans, scoring the most important goal in the modern history.”

“Erling has the quality to be there. It’s not about him or Sergio. What Sergio has done is amazing. But Erling has this talent. When City bought Erling, everybody talked about what he has done in the past. What we wanted to do is help him. Hopefully he can enjoy and score more goals. What he has done in Norway, Austria and Germany he tries to do here. He’s talented, we knew it,” he added.