India batter Suryakumar Yadav on Wednesday played a spectacular knock against Hong Kong that powered his side register a 40-runs win. 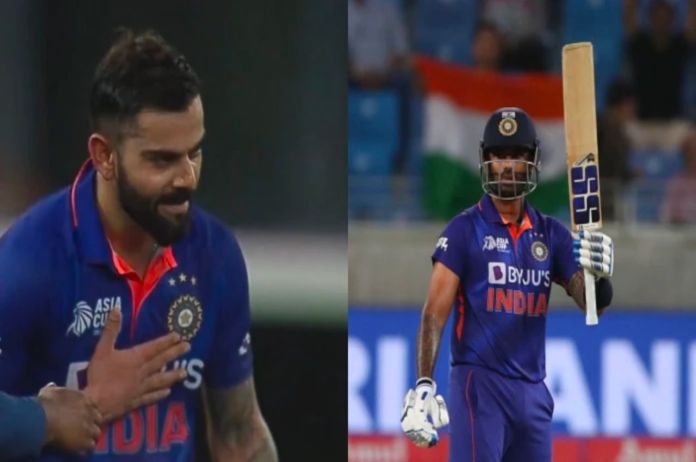 Dubai: India batter Suryakumar Yadav on Wednesday played a spectacular knock against Hong Kong that powered his side register a 40-runs win. While returning to the dressing after the end of innings, Virat Kohli acknowledged his performance by bowing down to him and later hugged him.

THIS is what Suryakumar Yadav said :-

In a post-match friendly conversation with Virat Kohli, SKY replied and said that Kohli’s presence on other end gave him confidence. “I needed him there so that I could play freely.”

Yadav was on the verge of becoming second ever Indian to hit 6 sixes in 6 balls when he was on fire in last over. However, he could convert only 4 balls in maximums. While talking about it, Kohli asked if he would have loved to achieve that record. SKY replied “let’s now surpass Yuvi Bhai.”

Yuvraj Singh is the only Indian to score 6 sixes in 6 consecutive ball of the over.

India defeat Hongkong by 40 runs after the heroics of Suryakumar Yadav and Virat Kohli.

After put to bat first, India put a total of 192 runs on board. Playing a spectacular 26 ball 68 knock that, Yadav powered his side.  He was supported by former Indian captain Virat Kohli with 59 runs. The two unbeaten players has put the target that will be difficult for Hong Kong to chase.