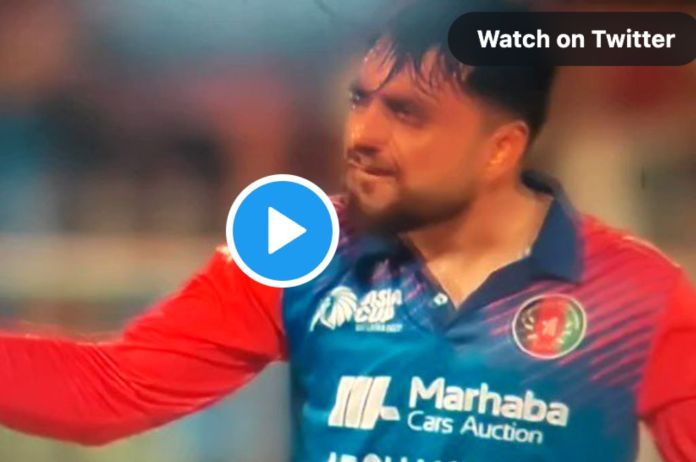 New Delhi: Afghanistan crashed to their first defeat of Asia Cup 2022, losing to Sri Lanka on Saturday by four wickets in the Super 4 stage at Sharjah Cricket Stadium in Sharjah.

However, things got heated in the 17th over of the chase. Lanka batter Danushka Gunathilaka got engaged in a heated conversation with star Afghan leg-spinner Rashid Khan.

The first ball of the 17th over saw Gunathilaka reverse sweeping Rashid’s delivery past short third man for a boundary. Moments later, the two players were seen exchanging some heated words in the middle of the pitch while Bhanuka Rajapaksa had to intervene and separate them.

A couple of balls later, Rashid gave it back by knocking the Sri Lankan batter over with a length ball. Gunathilaka tried to slog-sweep, but the ball turned in, sneaking under him and rammed into the wickets. Eventually, Rashid had the last laugh as he send Gunathilaka packing for 33 runs off 20 balls.

After the match, Bhanuka Rajapaksa said, “When I went to bat in, it was just a matter of connecting the ball well and running initially, but the wicket seemed quite good, and we thought 175 was a pretty good score. All in all, the boys did a great job and it was a fantastic win for us. In the IPL I have batted at number 3, and coming back to Sri Lanka’s squad, they wanted me to bat at number 3 initially, but in order to strengthen the middle-order they wanted me to bat at number 5, or number 6.”

“I am enjoying at the moment. It was a bit of a redemption, because in the last game they managed to get us all out for 105, so we wanted to raise our hands up and show the entire world that we are not as bad we were the other night,” he added.