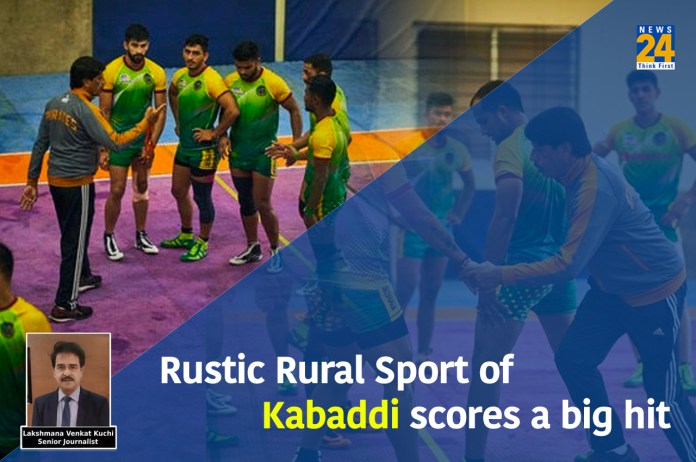 It was ten years ago, Marshal Sports, event organisers took the rural Indian sports on a world tour – so to speak – bringing it in front of an urban audiences that grew up on a staple of cricket, football, tennis, badminton and track and field athletics.

The sport presents an amalgamation of skill sets required in different sporting disciplines in the newest version that appears tailor made for television – and besides, the sport too willingly underwent changes as suggested by the sports management and marketing gurus – with the result it got a complete makeover that attracts viewers, on the ground and on television screens.

More important, this transformation helped countless rural boys break into big money, popularity, and a profession – that is giving them an identity of their own as sporting stars of repute. Not just in rural settings but all across the sports loving people living all over India and abroad.

From Friday, for the next three months, pro Kabaddi season will play out, presenting pulsating action for the sports lovers, with athletes from 12 competing teams vying for honours.

What makes the sudden spurt in popularity and marketability of a rural Indian sport is something of a case study for management students. But for Kabaddi players like Ravi Shetty, a veteran player and now the Chief Coach for a professional team – the Patna Pirates – it was something waiting to happen. This season, Neeraj Kumar, one of the younger crop of talented players who skippers Patna Pirates will also be in action from Friday. He too is an ex-army man and has represented the armed forces in several domestic competitions.

From just a game that was largely played by have-nots in villages to its current day status as a professional league on which rides huge sums of money and professional players getting paid handsomely, in figures that were earlier reserved for successful cricket stars is a journey that has done a world of good to Kabaddi, the players and the entire ecosystem that is getting built around it now. And for the administrators and runners of this sport, it sure has become a money spinner as well.

Ravi Shetty, hailing from Karnataka and one who had represented India in Kabaddi and a trained coach, is happy over the transformation that is helping him continue with the sport he made his life. This year, he has been signed up by Patna Pirates, which has won three thumping finals and many of its players are today household names in the sports loving sections of the society.

Kabaddi and Kho Kho were two popular sports that every school, mostly the government run, and government aided schools offered, probably also because there was no equipment and infrastructure costs involved.

Ravi Shetty is happy that this largely amateur level sporting events of Kabaddi at school, state and national level championships were today feeding the professional Kabaddi league with constant supply of young, talented and skilful players from villages and small towns as well. Shetty and others like him thank their stars that they are present to benefit from the “privatisation” of Kabaddi – and its new avatar as Pro Kabaddi League on the lines if IPL of Cricket.

PKL, which began in 2014 as a televised professional sporting event, this year will be having 12 teams vying for top honours, promising the thrills, emotions and drama of Kabaddi that is witnessing a growing footprint in terms of television viewership and stadium audience, across India and in different parts of the world.

Ravi Shetty, among the leading Kabaddi professionals who have gained immensely from the transformation the sport, told Rashtradoot that “in the last decade or so, television made the game more interesting and spectator friendly. Or rather the changes brought into the game to suit television programming, and use of technology in the game  has taken it to the next level.”

A coach for ever a decade, Shetty has even coached the Malaysian National team and was the head coach of U Mumba that won the summit title of PKL in 2015.

“This year, my effort will be to ensure podium finish for Patna Pirates,” Shetty said.

“When I was playing completive Kabaddi, things were not so professional and there were fewer opportunities as a player. There was no unanimity over rules of the game and standardization was missing,” Shetty said.

But what makes the game to exciting and interesting for the viewers, according to him was due to the fact that this sport displays the multi-faceted skills of a Kabaddi player. In Kabaddi, if you analyse, one needs the skills of a footballer, rugby player, wrestler, and an athlete The sort duration match, 40 minutes, lends it an ability to become a television sport, and since it is a physical contact sport with all the elements of drama and human emotions in full flow, it has hooked many audiences. It has been successfully sold as a potent entertainer.

The involvement of celebrities, Shetty said, only increased its appeal and marketability that for the players and all the people connected with Kabaddi means nothing less than a lottery of sorts.

Today, many Kabaddi players have a lifestyle that can leave people jealous. “I am extremely happy on the progress of Kabaddi. When I was playing, opportunities were fewer, but then so was the case with other sports. But today, Kabaddi players get preference in jobs in the army, paramilitary forces, railways, and public sector companies,” Shetty said.

Though National Institute of Sports did get involved with Kabaddi and began training coaches for the sport in the early 70s, and the game became popular in schools and colleges, it was the entry of private sector that electrified it with much needed modifications.

Now even city dwellers are turning to Kabaddi given the opportunities that have come up. Introduction of more competitive elements in the sport – like Super Tackle (when three or less players on the mat make a successful tackle) needing grit, technique, and strength to pull it off – have made the game more interesting for the viewers.

“Say ten years ago, though the sport was being played across India, not many followed rules and regulations governing the sport. Neither were trained coaches present in large numbers when I started playing long time ago,” Shetty said and added, “Today, there is increasing use of technology in the sport, which is adding to the overall professionalism.”

To be able to be a successful Kabaddi player, one must have the thinking capabilities of a chess player, skills of a rugby player to carry out tackles, skills of a wrestler for handling different kinds of tackles, Shetty said. Kabaddi needs skills of various sports and packs different actions into just 40 minutes, and this makes for good television.

Shetty, and others like him, are benefitting from Kabaddi’s elevation. Why he is even coaching teams online – like Netherlands. Actually the sport is gaining in popularity as some see it as a version of rugby. He has also coached a team from Malaysia.

Today there is a world championship in which 32 nations participate. The game is popular in Singapore, Thailand, Indonesia as well. There are Kabaddi teams of France, Germany, Netherlands, and Great Britain and “I have been contacted by them also,” Shetty said. The Indian Kabaddi league is witnessing the arrival of some foreign players as well, he said.

Shetty sees a brighter future for Kabaddi and hopes if India takes the lead in popularising the sport across the world.