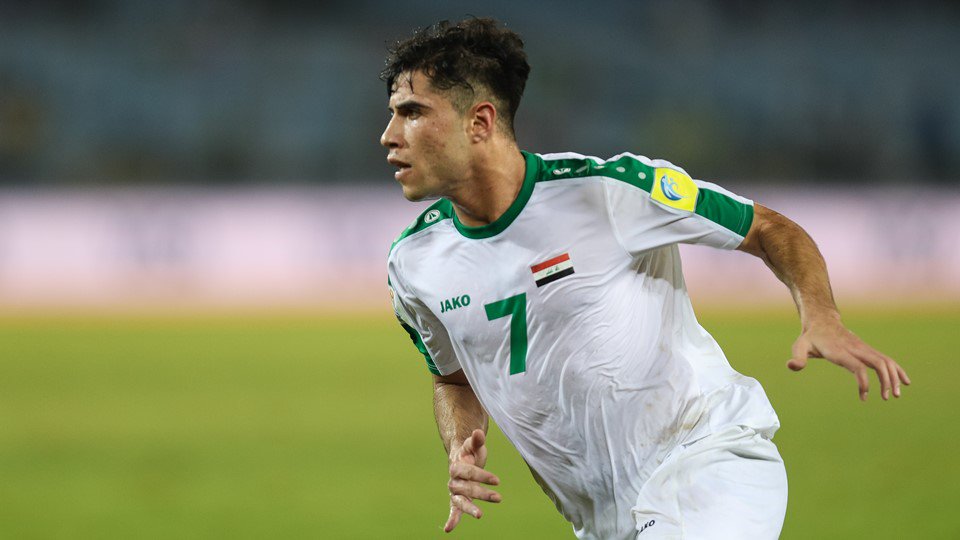 Kolkata, Oct 11: In-form Iraq dazzled yet again, blanking a rudderless Chile 3-0 to register their first ever win in the Under-17 FIFA World Cup and stayed firmly in contention for a knockout berth in the competition here on Wednesday. The star of the day for Iraq was striker Mohammed Dawood, who scored a brace (sixth and 68th minutes). He missed out on a hat-trick when his penalty was blocked by goalkeeper Rodrigo Cancino in the dying minutes of the Group F game before a good crowd at the Vivekananda Yuva Bharati Krirangan. Chile's Diego Valencia put the ball in his own net in the 81st minute to complete the misery for the South American outfit. Iraq, who had lost all their three group matches in their only previous appearance in the tourney in 2013, managed their first point on Sunday when they warmed their way into the fans' hearts by holding two-time champions Mexico to a 1-1 draw. With four points from two games, the Asian U-16 champions now need only a draw against England in their last group game on Saturday to sail into the Round of 16.  On the other hand, Chile are staring at the barrel having lost both their encounters, conceding as many as seven goals. On Wednesday, Chile were under the pump from the beginning, conceding a goal early, with the dangerous Dawood firing a right footer into the net from an acute angle, despite being hemmed in by two Chile defenders. Dawood had failed to control the ball in his first attempt, but quickly recovered ground to excel in scoring his second goal of the tournament, that earned all round applause from the 40,000-plus crowd in the galleries. The margin was doubled midway into the second half. The fleet-footed Dawood looked menacing as he almost managed to cut through two Chilean defenders, but was brought down by a desperate Martin Lara. Dawood himself took the free kick -- a low one that swerved in to give the forward his third goal in the competition.  Nine minutes from time, substitute Valencia struck an own goal following a corner from the left, sealing Chile's fate in the game, and may be, in the tournament, as well. It was a completely one-sided match, with the Asian side making constant forays into the rival defence, and enjoying 68 per cent of ball possession in the first half, and 59 per cent overall, The Chileans, who made four changes to the starting line up that collapsed 0-4 to England three days back, seemed out of sort. They hardly managed an attempt at the Iraqi goal, as their attempts fizzled out in the rival defensive third. The Iraqis, who started on a rousing note, could well have doubled the lead in the 13th minute when Bassam Shakir latched on to a cross from Muntadher Mohammed and unleashed the left footer, but the ball was off target.  Down 0-1 at the break, Chile tried to show more purpose in the initial minutes of the second session, but Antonio Diaz's left footer narrowly missed the target. But Iraq seized the initiative soon after, with Dawood coming close to scoring in the 50th minute. The highly-rated striker in fact could have finished off the day with a hat-trick, had he managed to score from a penalty in stoppage time, after he was brought down inside the box. However, Cancino fisted off the set-piece, and the rebound landed on the roof of the net.