India hits out at Pakistan for using fake photo at UN, shows image of own terror victim

United Nations, Sep 25: India hit out at Pakistan saying it has callously exploited the picture of an injured Palestinian girl to spread falsehoods about India and to divert attention from Islamabad's role as the hub of world terrorism. Paulomi Tripathi, a First Secretary in India's UN Mission, on Monday held up both the fake picture used by Pakistani Permanent Representative Maleeha Lodhi and the photograph of Lt. Umar Faiyaz, a young soldier from the Indian Kashmir who was kidnapped and tortured by Pakistan-backed terrorists. The picture showed the body of Faiyaz surrounded by mourners. 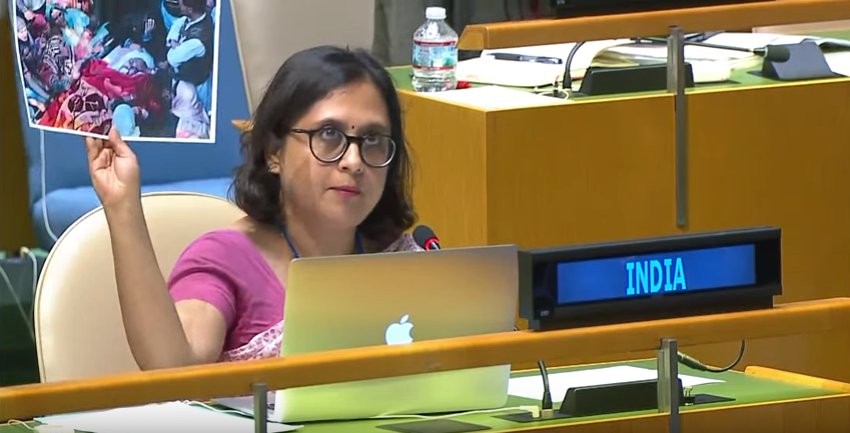 The photograph of Faiyaz "reflects the real pain inflicted by the nefarious designs of Pakistan on India", Tripathi told the General Assembly, contrasting it with the fake picture used by Lodhi on Saturday while reacting to External Affairs Minister Sushma Swaraj. The picture of the injured girl that Lodhi displayed, was on the other hand, that of Rawya Abu Jom'a taken in July 2014 and published by The New York Times in March 2015 under the caption, "Conflict, Courage and Healing in Gaza," she pointed out. Holding up both pictures, Tripathi directed attention to the picture of the Indian soldier and said: "This is a real picture and not a fake picture of Lt. Umar Faiyaz. A young officer from the Indian State of Jammu and Kashmir, Umar Faiyaz was kidnapped at a wedding reception. He was brutally tortured and killed by Pakistan-supported terrorists in May 2017." "This is a true picture," she said. "It portrays a harsh reality. A picture of terror emanating from across our borders that the people of India, especially in the Jammu and Kashmir have to struggle with everyday." "This was the reality that the Permanent Representative of Pakistan sought to obfuscate," Tripathi said. 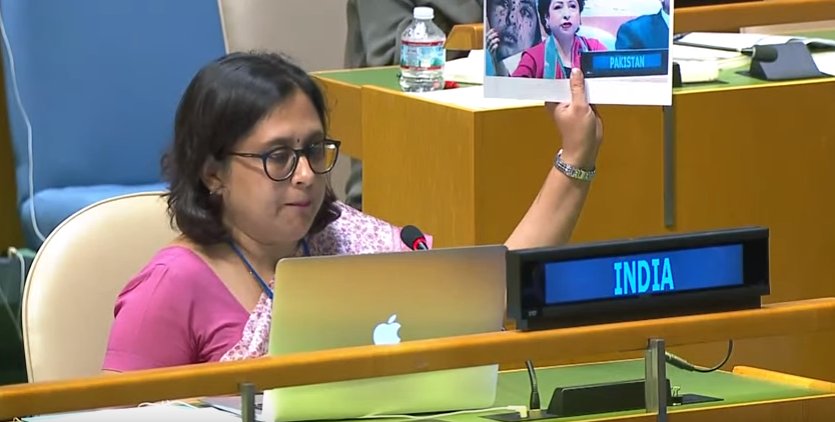 Lodhi "yet again sought to divert attention from Pakistan's role as the hub of global terrorism," Tripathi said. "She did so by callously holding up a picture of an injured girl." "The Permanent Representative of Pakistan misled the Assembly by displaying this picture to spread falsehood aboyut India," Tripathi added. "A fake picture to push a completely false narrative."