Sasikala will be expelled from AIADMK today? 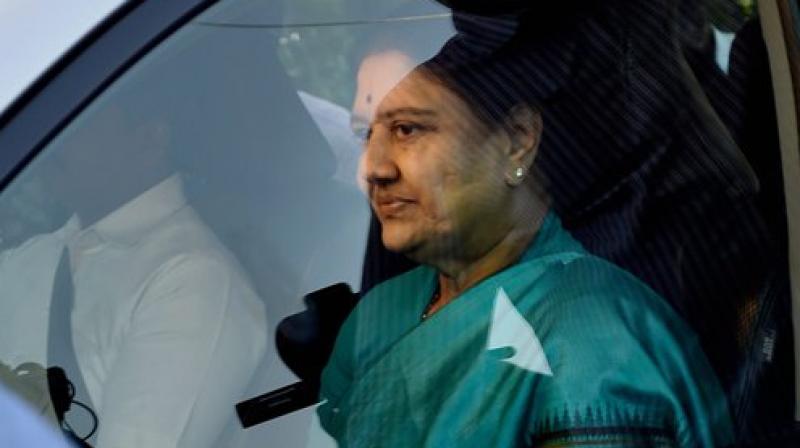 Chennai: A crucial meeting of the merged factions of AIADMK will be held at the party headquarters to decide on the modalities of ousting jailed interim General Secretary V.K.Sasikala and also to declare the actions taken by her nephew T.T.V.Dinakaran against party office bearers, said a senior party leader. "The meeting will be attended by the members of Executive Committee, the newly set up coordination committee, Members of Parliament and Members of Legislative Assembly," the leader who did not want to be identified told IANS. "The main agenda of the meeting to discuss the ways and means of ousting Sasikala from the General Secretary's post. The meeting will also declare that the actions taken by Dinakaran against party office bearers as null and void," he added. The AIADMK leader said the meeting would reiterate that the appointment of Dinakaran is void as he did not complete five years in the party as a member to hold a party post. Ever since the faction led by Chief Minister K.Palaniswami sidelined him, Dinakaran has been trying to establish his supremacy within the party as its "Deputy General Secretary" appointed by Sasikala before going to the jail. Dinakaran is now on a sacking spree and on Sunday dismissed Chief Minister Palaniswami as the party's Salem Suburban District Secretary. Earlier he had sacked several party officials like former Minister S.Gokula Indira, Chief Whip S.Rajendran and others and also expelled from the party Rajya Sabha Member R.Vaithialingam. The Monday meeting at AIADMK headquarters will also discuss the issue of 19 legislators giving a letter to Governor C.Vidyasagar Rao withdrawing their support to Palaniswami and wanting a new Chief Minister. "As per party laws, fifteen days notice has to be given to general council members. Most probably the meeting would also finalise the date of the general council meeting," the AIADMK leader told IANS. According to him, the general council has around 1,300-1,400 members and nearly 85 per cent of them are in support of the ruling faction. Post the merger between two factions - one led by (now) Deputy Chief Minister O.Panneerselvam and the other by Chief Minister Palaniswami, the duo also announced that steps would be taken to sack Sasikala from the party post and also from the party. Officially the AIADMK had broken into two factions - one led by Panneerselvam and the other by Sasikala. The Election Commission has recognised only these two factions at the time of the bypoll for the R.K.Nagar constituency. The bypoll got postponed on the grounds of money play in bribing the voters. Subsequently a third faction emerged under Palaniswami as it developed differences with Sasikala-Dinakaran faction. "The merger of Panneerselvam group happened with the faction that commands majority in the party. The Palaniswami group could be termed as the dissident group of Sasikala faction," the AIADMK leader added. IANS