New Delhi: The new year is round the corner, and so is the sale season. Budget carrier IndiGo has come up with a promotional offer where it is offering tickets from as low as Rs 999, which is open till December 25 and applicable on all travel between January 9, 2017 to April 15, 2017.

However, it should be noted that the ticket fare is different for various routes, and also there is ambiguity over the number of tickets on offer under the promotional scheme.

Indigo’s arch rival Jet Airways, too have come up with a similar offer. Ticket fare on this airline starts from Rs 990 for travel on or after January 4, 2017. However, in order to avail the offer, one must purchase the tickets between December 20, 2016 to December 23, 2016. 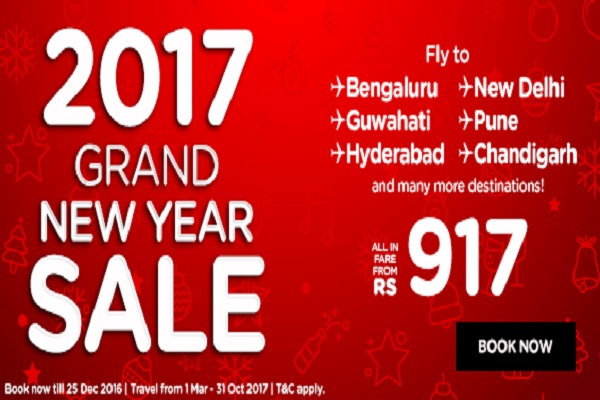 AirAsia India, another budget flight, is selling all-inclusive tickets from Rs 917 under its special New Year Sale offer—open till January 1, 2017—and is applicable on travel between March 1, 2017, and October 31, 2017.

Sniffing the competition, even GoAir is offering discounted tickets starting from Rs 1,057 on select sectors. As per its website, the fares are applicable till December 31 and varies according to the route.