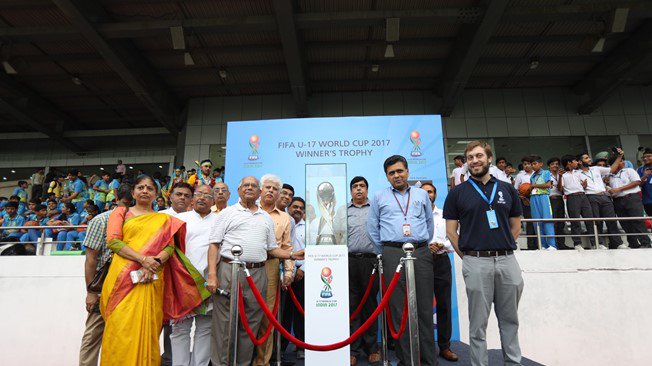 Around 2.5 lakh people gathered at India Gate in the capital city here as the FIFA Under-17 World Cup trophy was displayed. Talking about the crowd participation, Tournament Director Javier Ceppi said: "It's been a fantastic start to the Trophy Experience. We have had over 200,000 people in Delhi who have had the opportunity to see the FIFA U-17 World Cup. This is a massive promotional push and we've done it in a space that is extremely significant. "India Gate is a landmark that resonates well because it honours heroes of India and we feel that people have responded quite nicely to it. They are very excited to see the Trophy. They're also very excited that the tournament is coming, and now, with the ticket sales going well, they need to pick up tickets or else they might miss the chance to see India play." New Delhi will host India's group stage matches. India will take on the United States, Colombia and Ghana in the initial round at the Jawaharlal Nehru Stadium here in the tournament, scheduled to be held from October 6 to 28. The U-17 World Cup trophy will be next put on public display on August 26 and 27 at the Indira Gandhi Athletic Stadium and Judge's Field in Guwahati.