Rashmika Mandanna looks like breath of fresh air in a blue sharara, PICS

New Delhi: Rashmika Mandanna is on a promotional spree for her upcoming movie Goodbye. The movie also stars Amitabh Bachchan in the lead role. As part of her promotional tour, Rashmika arrives in Delhi and got papped by the shutterbugs.

Rashmika looks adorable as she was spotted in a blue sharara with a white embroidered print. She styled her hair in a ponytail. The actress accessorised her look with drop statement earrings. 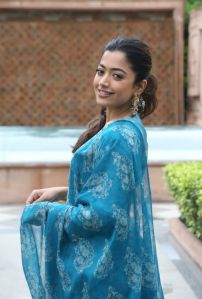 Meanwhile, Rashmika Mandanna’s fans are eagerly waiting since the trailer of her next movie Goodbye dropped in. The film, also starring Amitabh Bachchan in the lead is all set to release on October 7, 2022.

After the release of the soothing track, Jaikal Mahakal from Amit Trivedi’s composition, the makers of the film have now dropped the most- groovy and peppy track of the year- ‘The Hic Song’.

The song showcases South Heartthrob Rashmika Mandanna acing her dance moves with her friends. ‘The Hic song’ is all set to be the party anthem of the season and has the most compelling track that the music admirers will end up listening to, over and over again.

Goodbye portrays the mayhem of every family dealing with the ups and downs that life throws.  It also gently reminds the significance of being there for each other, through it all. The trailer of the film touches your heart and takes you on a roller-coaster ride of emotions.

Amitabh Bachchan and Rashmika Mandanna will be seen sharing a father-daughter relationship and their bond evolves with the changing aspects of life.

The movie is helmed by Vikash Bahl. The film is produced by Ektaa R Kapoor’s Balaji Motion Pictures in association with Good Co.