New Delhi: Not only a versatile actor but global icon Priyanka Chopra is also a great wife and lovely mother. As soon as she returned from her India tour, she took no time to spent her times with her hubby Nick Jonas and daughter Malti Marie.

Earlier, she surprised fans with a lovely family picture. In the picture, the actress is seen chilling with Nick and Malti Marie. Now on Saturday, Priyanka Chopra took to her Instagram story and posted an adorable picture. In the picture she is seen holding Nick Jonas’s hand as the couple enjoys their romantic date night in Los Vegas.

Sharing the picture, she captioned, “Vegas nights with bae.”

Nick is seen sporting a yellow jacket while Priyanka has opted for a long red overcoat. As soon as she dropped the story, fans went gaga over it. Fans dropped hear emojis in the comment section.

On Friday, Priyanka Chopra took to her Instagram handle and shared a glimpse of her Christmas preparations. It will be special for her as it is the first Christmas after Priyanka became mom to Malti Marie.

Sharing a picture on her Instagram story, the actress wrote, “It’s up!” In the picture we can see her Christmas tree-all decorated and lighted. In another picture, she can be seen twinning with Malti in white as they sat in front of their fireplace. However, Priyanka did not reveal Malti’s face. 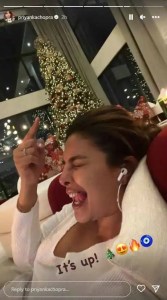 Meanwhile, Priyanka visited India after 3 long years, the actress visited Lucknow, Uttar Pradesh for a field visit to see the work done by UNICEF. She is UNICEF’s brand ambassador and was seen interacting with the school girls.

She also shared a lot of glimpses from her Mumbai tour and also gave an update regarding her forthcoming film Jee Le Zara. Speaking to PTI about the same, she said that they will hopefully start shooting for the film in 2023.

Meanwhile, on the work front, Priyanka Chopra will be seen next in Love Again, a musical. She will co-star with Sam Heughan and Celine Dion. The actress also has the series Citadel, produced by Russo Brothers. She also has Farhan Akhtar’s Jee Le Zaraa along with Alia Bhatt and Katrina Kaif in the lead.

This is how Ginger (अदरक) can boost your immunity in Winters

Christmas Cake Recipe: Why spent outside, when you can bake it at home?