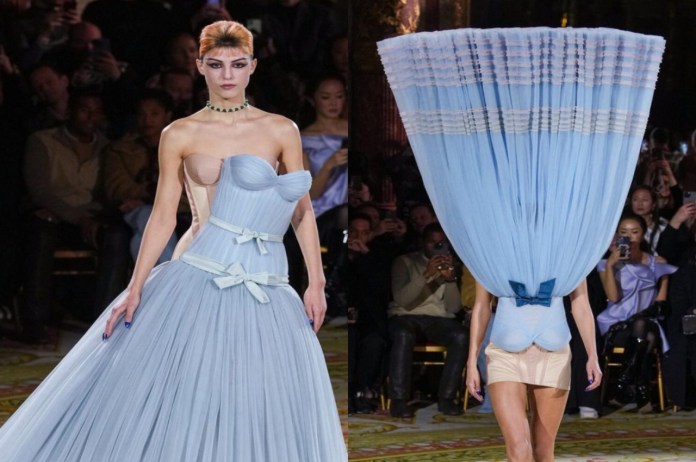 Paris Couture Week: For a variety of reasons, the Paris Haute Couture Week has been highly exciting and memorable. Doja Cat sauntered into the Schiaparelli presentation in a scarlet gown covered in over 30,000 Swarovski crystals, while Kylie Jenner made her entry in a black dress with a false lion head.

However, it appears that Viktor and Rolf have topped the list of must-see moments in their most recent concert. Dutch designers Viktor Horsting and Rolf Snoeren showed a collection of the most meme-worthy ensembles at the Intercontinental Le Grand hotel in Paris.

The models turned heads as soon as they walked the runway in stunning tulle skirts in pastel tones. However, as the presentation went, the costumes appeared on the models in the most unusual positions. A ballgown was worn upside down on a model whose face was obscured by the bustier, which was worn from the waist up.

You can always count on Viktor & Rolf for bringing humor to Couture pic.twitter.com/XI4N6njeRL

Another model wore a lopsided dress, while another wore a tulle dress in front of the model, who was only wearing undergarments. One white tulle gown was worn sideways by a model wearing nothing but a nude bodycon. The show featured Viktor & Rolf’s haute couture Spring/Summer 2023 collection.

The tulle garments were also arranged diagonally, from sideways to upside-down and lopsided. The strange show had elements of ridiculousness as well as fanciful, gravity-defying notions. People reacted to the waggish collection as soon as photographs of the exhibition appeared on social media.

The show was attended by singer Doja Cat, who made headlines once again for donning double eyelashes as a moustache.