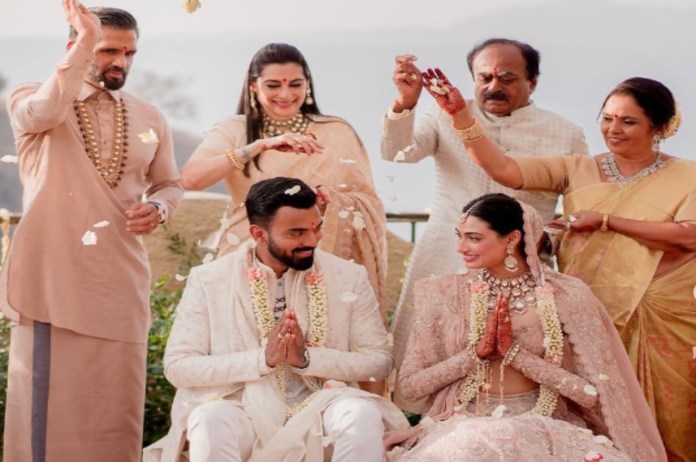 Athiya and Rahul’s private wedding ceremony was attended solely by family members and close friends. Despite the invitation, some of KL Rahul’s cricketer buddies and Suniel Shetty’s B’town acquaintances did not attend the wedding due to their hectic schedules.

According to sources, KL Rahul’s close cricket pals, including Virat Kohli, Hardik Pandya, and Suryakumar Yadav, were unable to attend the wedding due to the ODI series. According to rumours, Kohli surprised his close buddy who is a “motorhead” by gifting him the latest model BMW automobile for Rs. 2.70 crores. MS Dhoni, the former captain who missed the wedding for unknown reasons, reportedly handed KL Rahul Rs. 80 lakh Kawasaki Ninja Bike as a wedding gift.

Suniel Shetty’s Bollywood friends include superstar Salman Khan and elderly actress Jackie Shroff, who sent Athiya Shetty and KL Rahul unique wedding gifts despite not attending the wedding. According to reports, Salman Khan gave the newlyweds an Audi, while Shroff surprised them with an expensive watch.

Interestingly, the bride’s parents, Suniel and Mana Shetty, have provided an update on their present for the newlyweds. According to rumours, the pair gave their newlywed daughter and son-in-law a beautiful flat in the heart of Mumbai costing over Rs. 50 crore. KL Rahul and Athiya Shetty, on the other hand, have yet to respond to any of these reports.