Kareena Kapoor Khan has been an inspiration to many when it comes to fitness and gymming.

New Delhi: Kareena Kapoor Khan has been an inspiration to many when it comes to fitness and gymming. The actress is still fit and fine after being a mother of two. All thanks to her fitness regimes! Well, she keeps on posting several pictures and videos from her gym sessions. Today, Kareena drops a few pictures and captions it, “Falling prey to @pumaindia 😉🤎.”

Flaunting her AW22 collection, Kareena posted her gym avatar where she is seen donning a brown and black gym attire. She looks cool in a casual makeup look. She kept her tresses open.

In the third picture, she is seen in a black and purple two-piece gym outfit. She stands taking the support of a free weight behind her. She looks dapper. 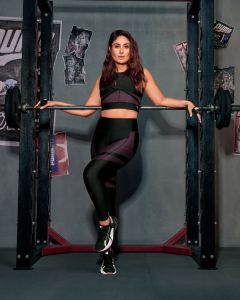 A few more pictures for you to look at 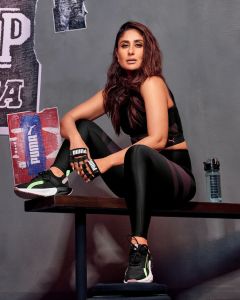 Kareena looks uber cool as she sits on a bench with a bottle to her side. She opted for black sports shoes.

As soon as she dropped the pictures, friends and fans took to the comment section to praise the Pataudi beauty. Actor Vijay Verma wrote, “Falling prey to your highness 🤌🏼.” Rhea Kapoor commented with five fire emojis. Saba Pataudi wrote, “🔥❤️Fit and Fabulous !…”

Meanwhile, on the work front, Kareena was last seen in Laal Singh Chaddha. Up next, the actor will next feature in Sujoy Ghosh’s The Devotion of Suspect X.  She also has a project with Hansal Mehta. Last year, on August 10, the Aligarh director shared a photo with Kareena and producer Ekta Kapoor.

In the caption, Hansal expressed that he is thrilled to work with the two stars of Bollywood. “They are incredible women and I’m thrilled to be working with them (and to be in the same frame as them) Looking forward to this journey Kareena Kapoor Khan and Ekta Kapoor (Sic),” he wrote in the caption.