New Delhi: As many celebrities celebrating their first Diwali as a couple, Hrithik Roshan and his girlfriend Saba Azad is not behind. The duo are dating each other for quite a long time now. Although they never made an official statement about their love affair, their frequent hangout, and social media PDA speak a lot about the same.

On Monday, Hrithik and Saba celebrated their first Diwali as a couple. Saba took to her Instagram story and shared a selfie with her boyfriend Hrithik Roshan. The couple looked cute together as they twinned in white attires. Sharing the picture, she wrote, “Happy Diwali.”

She also gave a glimpse of the Diwali decoration at Hrithik’s home. Have a look: 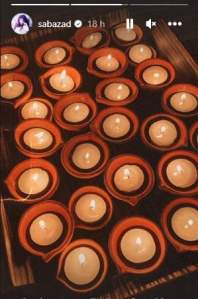 As per media reports, Hrithik and Saba met through a common friend, who is into Indie music and after their first meeting, the couple stayed in touch.

Hrithik and Sussanne Khan parted ways in 2014. But the duo still continues to co-parent their kids, Hrehaan and Hridaan.

On the work front, Hrithik was last seen on the big screen with Vikram Vedha along with Saif Ali Khan. It was directed by Pushkar–Gayathri. The film also stars Radhika Apte, Rohit Saraf, Yogita Bihani, and Sharib Hashmi.

On the other hand, Saba will star next with Namit Das and Geetanjali Kulkarni in the film, Minimum, where she will essay the role of a French girl, co-starring Geetanjali Kulkarni, Namit Das and Rumana Molla. Recently, she wrapped the shoot of her film Song of Paradise, which also features Soni Razdaan, Sheeba Chadha, and Taaruk Raina among others.

How to get rid of Dark Circles in just three miraculous steps? read here

Vastu Tips: Place staircase in this direction at your home or office

Salt Remedies: Save your house from evil eye, know how