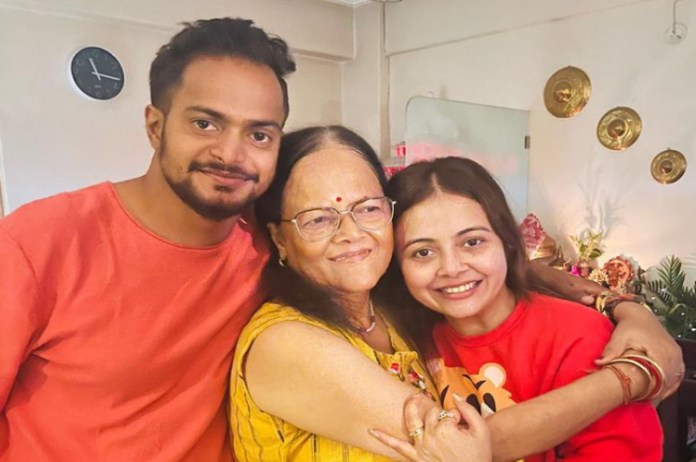 New Delhi: A well-known name in the entertainment sector is Devoleena Bhattacharjee, who shot to prominence with the programme Saath Nibhaana Saathiya. The actress won the audience over with her sweet and delicate portrayal of the quintessential Indian bahu. When the actress applied to be a competitor on Bigg Boss 13, she shatter that perception. When the actress recently revealed her nuptials on social media, it caught her admirers off guard. On social media, she posted images from her first Christmas celebration with her husband Shanawaz and other loved ones.

Along with her husband Shanawaz and her mother, the Saath Nibhaana Saathiya actress hosted a small but charming Christmas event at her house. Devoleena looked lovely wearing a red jogger and sweatshirt. She posted some entertaining images on social media. She invited a few friends over as well for the festivities. The actress brought a Christmas tree and decorated her house for the holiday season. The tree was placed in the living room. As she posted joyous moments on social media, the actress wished all of her followers.

When Devoleena Bhattacharjee revealed photos of her nuptials to her longtime boyfriend Shanawaz, she shocked her fans. Earlier this month, the actress and her personal trainer got married. She was stunning in a red saree and ethnic jewellery, while her husband Shanawaz was dressed in a black suit.

Some online trolls teased her for marrying a Muslim man, but she responded by slamming them. Devo stated that she is not bothered by trolls in an interview with Etimes TV. She said that over time, she had discovered how to stay away from them. The actress continued by saying that she had discovered one lesson: no matter what people say, she cannot spend her life in accordance with them. She claimed that she was glad to have found the ideal spouse and that her life and decisions were her own.