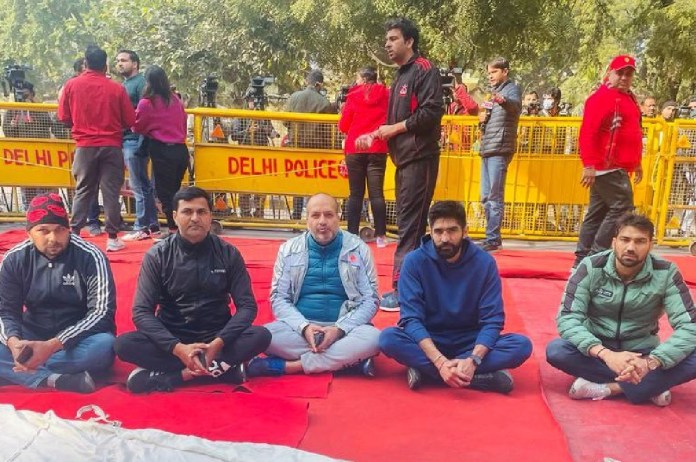 New Delhi: India boxer and Congress leader Vijender Singh on Friday was asked to get off the stage while he went to join a protest by Indian athletes against Wrestler Federation of India (WFI) president Brij Bhushan Sharan Singh.

Showing the “sporting fraternity”, Vijender sat on the protest stage but he was asked to vacate the spot. The protesting wrestlers have cited that they do not want any political color to the demonstration but justice.

Meanwhile, talking to the media, Singh said, “I want justice to be served to those wrestlers, there must be a thorough probe into the allegations raised by wrestlers and there must be a CBI probe against those who’re involved in this.”

Earleir on Thursday, CPI (M) leader Brinda Karat also joined the protest. She stood up at the stage while wrestlers Bajrang Poonia and Sakshee Malikkh were addressing the rally.

However, Poonia asked the CPI (M) leader to join the protest while being in the crowd, insisting that they do not want to make it a political issue.

The top wrestlers have alleged that female athletes as well as coaches have been subjected to sexual assault by the WFI president Brij Bushan Sharan Singh. During a Press Conference on Thursday, Wrestler Vinesh Phogat said that there are at least 5-6 female wrestlers ready to file complaint against the assault they faced.

She said there are other girls sitting among the protestors who do not want to reveal their identity but they will also come out if forced.

Sakshee Malikkh informed that they have been receiving calls from across the nation female athelets alleging harassment. She asserted that there are people in WFI and state federation for wrestling who tortures female athletes.

She added that these federations should be dissolved and a new committee should be formed where former or senior athletes should be elected.

Protestors also accused the federation of mental torture with the athletes on loosing games. In this regard, Vinesh Phogat said, “After the Tokyo Olympics defeat, WFI President called me ‘khota sikka’. WFI mentally tortured me. I used to think of ending my life each day. If anything happens to any wrestler, then the responsibility will on WFI president.”

Day 3 of the protest

The wretlers have been protesting for the third today, demanding justice for all the athletes who have faced sexual and mental assault from the wrestlers. The protesters have sat on the Jantar Mantar in the national capital.