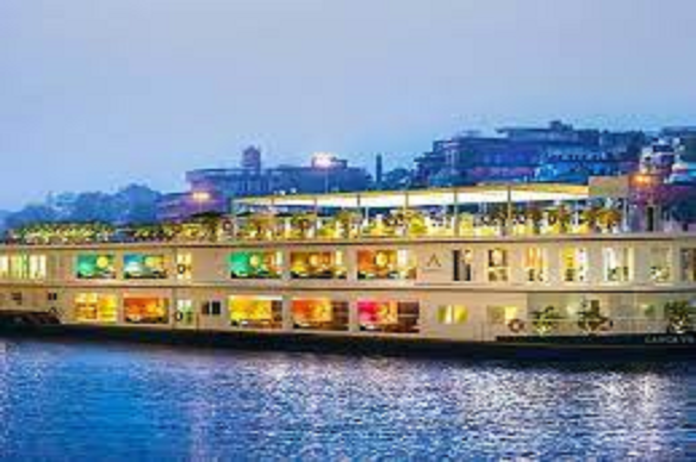 The MV Ganga Vilas will set off from Varanasi in Uttar Pradesh and cruise 3,200 kilometres through Bangladesh in 51 days to reach Dibrugarh in Assam.

Yogi Adityanath, the Chief Minister of Uttar Pradesh, Minister for Ports, Shipping, and Waterways Sarbananda Sonowal, as well as other Ministers and top officials from other Ministries and Departments, would be present for the flag-off ceremony.

According to Union Minister for Port Shipping and Waterways Sarbananda Sonowal, on its maiden voyage, the MV Ganga Vilas will travel 27 river systems, carrying 32 tourists from Switzerland, and stop at a number of well-known locations along the river banks in Varanasi, Patna, Kolkata, Bangladesh, Guwahati, and Sibsagar/Dibrugarh.

Foreign visitors would get the chance to experience the art, culture, history, and spirituality of India and Bangladesh through the journey, according to Sonowal.

The Union Minister added that PM Narendra Modi’s aim of turning waterways into a source of national growth has culminated with this voyage. More than 100 waterways are being built in different parts of India to help with the ecosystem development along the waterways, which will increase cruise tourists, benefit nearby businesses along the riverbanks, and help local economies expand.

The modernist ship is 62 metres long, 12 metres broad, and needs a draught of 1.4 metres. It was built to honour Indian and world design. The ship can accommodate 36 people in total with its 18 suites and all of its amenities.

The “River Cruise Vision Document 2047” that PM will publish outlines its goals for the development and expansion of river cruise by the year 2047.

The PM will also open the Haldia Multi-Modal Terminal, four floating community jetties in Uttar Pradesh, and the Guwahati Skill Development Center in Assam at the occasion.

IWAI has launched a number of projects, including the Haldia MMT, to support the expansion of water transport in India. In the state of West Bengal, the industrial port city of Haldia is situated where the River Hoogly and the Bay of Bengal meet. Haldia’s favourable location gives it a competitive logistics edge with regard to the waterways. It offers the chance to import and export goods at very reasonable prices. Developed.

The Haldia Multi-Modal Terminal (MMT), part of the Jal Marg Vikas Project, was built on 61 acres in the Purba Medinipur District of West Bengal and has a 3.08 MMTPA cargo handling capacity. The berths are made to accommodate ships up to 3000 DWT.

The communal jetties, according to a representative of Port, Shipping and Waterways, are intended to promote inclusive growth and will be important.