Whole world is watching struggle of our ancestors, Hemant Soren 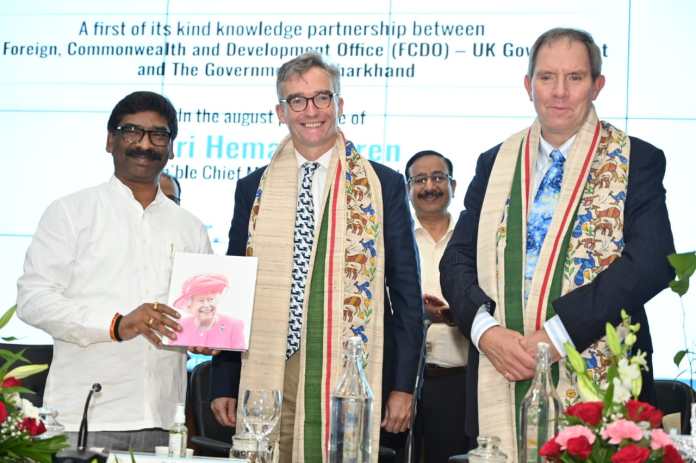 New Delhi: Chief Minister Hemant Soren said that today is a historic day for Jharkhand. Today we will show our new generation a new path toward education. Today a landmark MoU has been signed between the Foreign and Commonwealth Development Office (FCDO) of the British High Commission, New Delhi and the Government of Jharkhand. On this auspicious occasion, I extend my warm greetings and thanks to the British High Commission to India, Alex Ellis and his team. The Chief Minister said that the elders have said a proverb “Education is the mother’s milk which the child will roar as much as he drinks.” 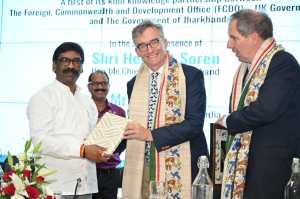 Jharkhand is the first state in the country which is striving to make the level of education as high as possible. Our government is working with commitment in this direction so that the young students here should get a better education. The Chief Minister said that under the Marang Gomke Jaipal Singh Munda Scholarship Scheme, only tribal children had gone abroad to pursue higher education in the first phase. This scholarship scheme seems to be more successful than expected.

It is true that if the intention is right, then only the one above supports it. In a very short time, the consent of the Central Government and the UK has been obtained. Now the scope of Marang Gomke Jaipal Singh Scholarship Scheme is increasing. Now our government will send tribal as well as backward class children, who want to study abroad, to study abroad under this scholarship scheme for higher education.

Marang Gomke Jaipal Singh Munda’s distinct identity in the country and the world
The Chief Minister said that with the prestigious Chibning Scholarship of the UK Government, now under the MoU with the prestigious Marang Gomke Jaipal Singh Munda Overseas Scholarship Scheme of the country and Jharkhand, youth will get an opportunity to study abroad every year.

The Chief Minister said that this is the first time that a State Government has signed such an MoU with the UK Government. The Chief Minister said that a hundred years ago today, a tribal youth from Jharkhand, Jaipal Singh Munda ji got the opportunity to study in Oxford University, he also captained the Oxford Blues team in hockey along with studies.

It was in England that he found a suitable environment to hone his leadership ability. This is the reason why people today know him as Marang Gomke. Jaipal Singh Munda has had a different identity in the state, country and world.

The result of that is that now every year we will not send 6-7 but 20-25 youths to study abroad. The Chief Minister said that youth from all sections of the society coming from deprived society have also been included in this scheme. Our youth going abroad for higher education are not just escholars of Jharkhand, they are also our Young Ambassadors.

8 players from Jharkhand won medals in the National Board Games

The Chief Minister said that all the eight players of Jharkhand played an important role in getting medals for the country in the recently held Commonwealth Games in Birmingham. No player of the state returned empty handed, all have shown the work of winning medals. Our government has been working to give a new dimension to this potential of the youth, respecting their dreams.

The state government has worked to formulate a new sports policy to provide a platform to the budding sportspersons of Jharkhand. Under the sports policy, the work has been done to connect the players with modern resources.

Jharkhand’s role is important in the vision of climate change

Chief Minister Hemant Soren said that Jharkhand state is playing an important role in many matters towards sustainable development. Our state is known for water-forest-land. There is a lot of potential in our state to move forward rapidly in the fields of solar energy and climate change etc.

Today the whole world is watching the struggle of Jharkhand and our organization through that prestigious museum. The Chief Minister said that today the British High Commission is starting in the field of higher education, it will be our government’s effort that in the coming times, we will work jointly with the UK Government and the British High Commission in other areas and help the state. Will move fast towards sustainable development.

The British High Commissioner appreciated the work of the state government

On this occasion, British High Commissioner Alex Ellis in his address appreciated the efforts being made in the field of higher education in Jharkhand under the leadership of Chief Minister Hemant Soren. The British High Commissioner said that Jharkhand has very beautiful plains. There is a lot of investment potential in Jharkhand. An investment friendly environment has been created here. The state government on its part is giving full support to the investors.