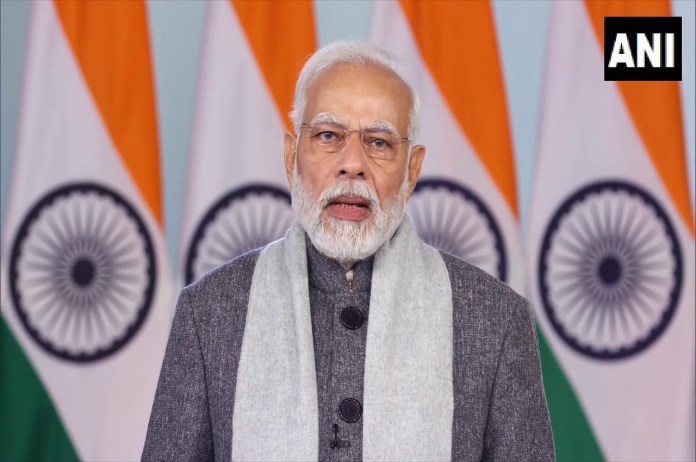 New Delhi: Prime Minister Narendra Modi on Friday said India cannot be defined in words and can only be experienced from the heart whilw flagging off the world’s longest river cruise MV Ganga Vilas in Varanasi.

“This is the decade of transforming India’s infrastructure. India has everything that one can imagine. It also has a lot beyond your imagination. India cannot be defined in words. India can only be experienced from the heart because India it always opened her heart for everyone, irrespective of region or religion, creed or country,” said PM Modi.

The PM attended the ceremony via video conferencing where he also inaugurated the Tent City at Varanasi and laid the foundation stones for several other inland waterways projects worth more than Rs 1,000 crore.

He added that the project of river cruise on Ganga river is a landmark moment. It will herald a new age of tourism in India.

“Wherever the cruise passes through, it will create a new line of development. Today, foundation stones have been laid for several other inland waterways projects worth more than Rs 1000 crores. This will expand trade and tourism and employment opportunities in eastern India,” Prime Minister said.

PM said Ganga is not just a stream for the people of the country but is the symbol of India’s penance.

PM Modi said the commencement of MV Ganga Vilas river cruise which will sail over 3,200 km is a living example of the development of inland waterways in the country. He said work is being done on the development of 111 national water highways across 24 States.

An official of Port, Shipping and Waterways told ANI that the world’s longest River Cruise MV Ganga Vilas is the first-ever cruise vessel to be made in India.

MV Ganga Vilas will begin its journey from Varanasi in Uttar Pradesh and travel around 3,200 km in 51 days to reach Dibrugarh in Assam via Bangladesh, sailing across 27 river systems in India and Bangladesh.

MV Ganga Vilas has three decks, 18 suites on board with a capacity of 36 tourists, with all the luxury amenities. The maiden voyage has 32 tourists from Switzerland signing up for the entire length of the journey.

The MV Ganga Vilas cruise is curated to bring out the best of the country to be showcased to the world. The 51 days cruise is planned with visits to 50 tourist spots including World Heritage Sites, National Parks, River Ghats, and major cities like Patna in Bihar, Sahibganj in Jharkhand, Kolkata in West Bengal, Dhaka in Bangladesh, and Guwahati in Assam.

The journey will give the tourists an opportunity to embark upon an experiential voyage and indulge in the art, culture, history, and spirituality of India and Bangladesh.

Further, Tent City has been conceptualized on the banks of the River Ganga to tap the potential of tourism in the region.

The project has been developed opposite to city ghats which will provide accommodation facilities and cater to the increased tourist influx in Varanasi, especially since the inauguration of Kashi Vishwanath Dham.

It has been developed by Varanasi Development Authority. The tourists will reach the Tent City by boats from different Ghats situated in the vicinity. The tent city will be operational from October to June every year and will be dismantled for three months due to rise in river water level in the rainy season.