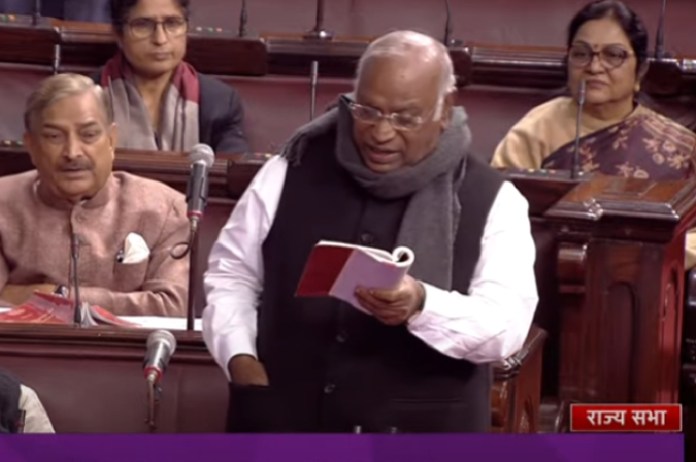 New Delhi: The Joint Opposition on Monday staged a walk out from the Rajya Sabha as their notice to hold a discussion on the India-China border clash was disallowed.

The Leader of Opposition and Congress’ chief Mallikarjun Kharge said, “They (China) are encroaching on our land. If we don’t discuss this issue then what else should we discuss? We are ready for discussion on this issue in the House.”

Earlier in the day, several MPs of Opposition gave Suspension of Business Notices in the upper house in order to discuss over the Twang border issue but the Chair rejected.

It should be noted that the Opposition has been bringing up the issue multiple times since a clash broke out between India and China at the Twang sector in Arunchal Pradesh in the on-going Winter Session in the Parliament.

Winter session of Parliament | They (China) are encroaching on our land. If we don't discuss this issue then what else should we discuss? We are ready for discussion on this issue in the House: LoP in Rajya Sabha, Mallikarjun Kharge pic.twitter.com/4zHZcbfFzo

India-China Face Off At Twang

A face-off between Indian and Chinese troops in the Tawang sector in Arunachal Pradesh on December 9 led to minor injuries “to a few personnel” from both sides. After which, both sides immediately disengaged from the area.

However, this caused panic in the nation hinting at the possible invasion and illegal encroachment of land by China.

Sources said, as a follow-up of the incident, India’s Commander in the area held a Flag Meeting with his counterpart to discuss the issue in accordance with structured mechanisms to restore peace and tranquillity.