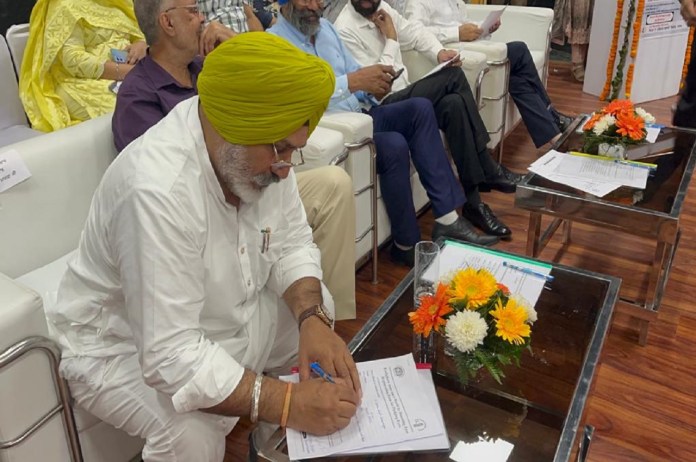 Chandigarh: With an attempt to boost the eye donation movement in the state, Punjab Health Minister Chetan Singh Jauramajra took the initiative by pledging to donate his own eyes. He said that the campaign should become people’s movement.

Chetan Singh Jauramajra, who also holds Medical Education and Research and Elections, said that the Punjab government led by Chief Minister Bhagwant Mann would not allow state government hospitals to become referral hospitals only. It is the first priority of the Chief Minister that Punjab becomes the number one state in the country in the health sector. To fulfill this promise, many milestones have been being achieved to provide better health services to the public, he added.

The minister informed that the previous charisma of Government Rajindra Hospital and Mata Kaushalya Hospital would be restored and patients be treated on the lines of PGI by providing state-of-the-art facilities and best doctors in these hospitals.

He further added that in the near future state hospitals in Punjab will provide medical packages at competitive rates to attract foreign nationals for treatment, which in turn would promote medical tourism and this could be a good source of revenue.

On the occasion three patients namely Gulzar Kaur of village Duladi, Seema Rani of Patran and Tejo Devi from Cheeka were also present who regained their eyesight after undergoing free corneal transplants at Rajindra Hospital after the resumption of eye pupil replacement operations after a gap of nearly 10 years. While sharing their experiences, these patients have expressed special gratitude to the Punjab Chief Minister and the Health Minister and stated that that it was the health model of Bhagwant Mann’s government which has come as a saviour for them.

Elaborating the health facilities in the state Chetan Singh Jauramajra said it was the first priority of Chief Minister Bhagwant Mann that Punjab became a number one state in the country in the health sector, therefore 16 new medical colleges would be set-up to provide affordable medical education to our students.

He also appealed to the doctors of the government hospitals of the state to cooperate with the government and work as a team to provide better health services to the patients with full diligence.

Earlier MLA Dr Balbir Singh congratulated on teacher’s day and said that once Patiala was a center for Keratoplasty (Replacement of eye pupils) but the previous governments never paid attention to it. He assured that the Punjab government under the leadership of Chief Minister Bhagwant Mann is paying full attention to health services.

Deputy Commissioner Sakshi Sahni assured the district administration would make special efforts to disseminate the message of voluntary eye donation to the common people so that the patients who have lost their sight due to any reason could get eyesight back.

On this occasion, the Health Minister also honored the Block Extension Educators (BEE) of the state, including Narinderpal Singh from Sangrur, Gautam Rishi from Barnala, Divesh Kumar from Fazilka, Ritu Mehta from Roopnagar and Sarabjit Singh from Patiala besides eye specialist doctors of Patiala district.