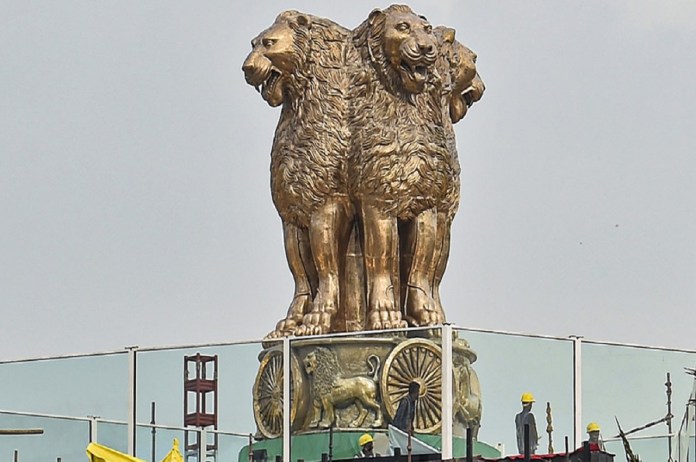 New Delhi: The Supreme Court on Friday dismissed a petition over the new national emblem installed atop the new Parliament building under construction as part of the Central Vista project

A bench of Justices M R Shah and Krishna Murari held that the lion sculpture of the emblem installed atop the new Parliament does not violate the State Emblem of India (Prohibition of Improper Use) Act, 2005.

The plea was filed in July by two lawyers, Aldanish Rein and Ramesh Kumar Mishra, who contended that the lions portrayed in the emblem appeared to be “ferocious and aggressive” as their mouths were open and canines visible.

According to a LiveLaw report, Rein contended that there cannot be artistic innovation with respect to the approved design of national emblem. The petitioner also contended that the logo of “Satyameva Jayate” is not there in the statue.

On petitioner’s submission that lions appeared to be more aggressive, Justice Shah orally observed “that impression depends on the mind of the person”.

The bench observed that there is no violation of act.

Prime Minister Narendra Modi unveiled the new national emblem cast atop the new Parliament building on July 12 this year. It is 6.5-metres high and weighs 9,500 kilograms.