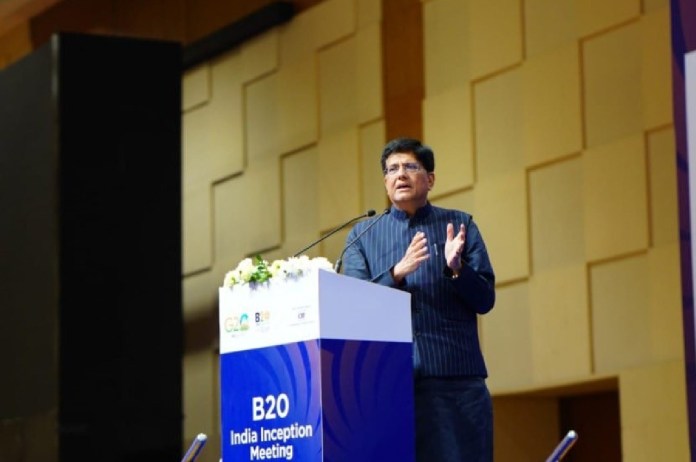 New Delhi: Union Minister of Commerce and Industry Piyush Goyal on Monday asked businesses to adopt a sustainable and green approach in business practices, suggesting them to use the forum of B20 along with G20 to look at how we can collectively work towards a sustainable and equitable future agenda.

The union minister was addressing the Inception Meeting of Business 20 (B20), the official G20 dialogue forum with the global business community in Gandhinagar.

The Minister applauded PM Narendra Modi’s vision of ‘Vasudhaiva Kutumbakam’, of peace and dialogue, orderly and inclusive growth and humane approach and said that India wanted to be a responsible global citizen, be it in the sphere of climate change or digital public infrastructure.

He said that through the theme of G20 in India- ‘one earth one family one future’ – we wished to inspire the world to care for each other, to have a greater degree of dialogue and greater concern for the planet and the future of our children.

Quoting Mahatma Gandhi, he said that we had inherited this world as trustees and it is our duty to leave behind a better world for next generation. We have to respect intergenerational equity- we do not have the right to use up all the resources of this planet, he added.

The Minister highlighted that India had always stood for sustainable development. He mentioned that it was one of the top 5 countries in the world in terms of adopting and implementing environmental goals.

India regularly files UNFCCC report and has already exceeded its goal for 2030, of having a 40 percent share of renewable energy in its installed capacity in 2021. India takes each sustainable development goal very seriously, he said.

Goyal noted that the while the world was worried about how India would cope with the pandemic, it had converted that fear into hope and emerged as a bright spot in the global economy. No other market in the world as large as the India opportunity today, he said and added that India hoped to power the world economy through collaborations and cooperation amidst competition and asked both Indian and foreign companies to serve the world using India as the base.

The Minister said that businesses that come to India have always succeeded because of our competitiveness. He opined that India offered the rule of law, inspiring and decisive leadership, transparent government policies, no opaque models and no hidden subsidies. He cited the example of a British Company that was manufacturing in UK, supplying to a few countries, and achieving a modest turn over.

A few years ago, this company set up manufacturing in India and due to the competitiveness of Indian manufacturing and our ability to launch newer products through design and innovation, the company now supplies products to over 110 countries around the world from India at affordable and competitive prices, he said. He also spoke of another tech-giant which already has 5-7 percent of manufacturing happening in India and plans to scale it upto 25 percent.

He expressed hope that by August, we would have a robust framework for B20 and we succeed in taking a message of responsibility, care and concern, a message of togetherness and oneness, a message that we will all work together for a better future for our children, from India to the world.

India assumed the Presidency of the G20 from 1 December 2022. G20 is a premier forum for international economic cooperation. Established in 2010, B20 is among the most prominent Engagement Group in G20, with companies and business organizations as participants. B20 leads the process of galvanizing global business leaders for their views on issues of global economic and trade governance and speaks in a single voice for the entire G20 business community.

B20 will operate through 7 Task Forces and 2 Action Councils entrusted to develop consensus-based policy recommendations to the G20.