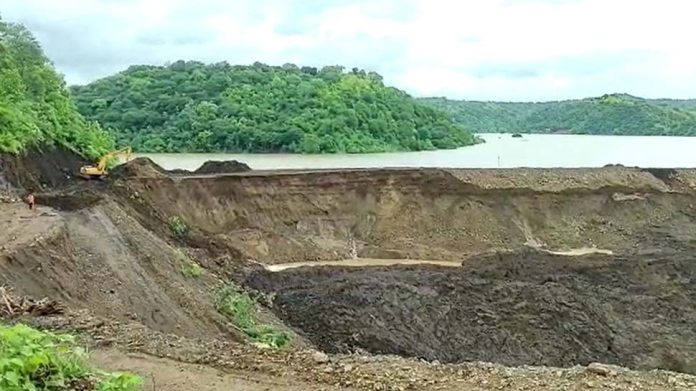 New Delhi: The work of saving the Karam river dam built in Bharudpura tehsil Kothida village of Dhar district is going on, although, after 40 hours of hard work, the administration team has got some success. Water has started pouring out of the dam from 12.30 last night, which is continuing. The route parallel to this water is being widened so that more water can be removed. At present, its width is 10 feet.

Now it is being increased to 25 feet and its depth is also being increased so that now the water of the dam can be emptied quickly. Let us inform that Chief Minister Shivraj Singh Chouhan himself is keeping an eye on this matter, he had informed Prime Minister Narendra Modi about the matter yesterday, while government ministers Tulsi Silavat and Rajyavardhan Singh Dattigaon are present on the spot.

Chief Minister Shivraj Singh Chouhan is keeping an eye on the whole matter. Even today, in the early morning, he spoke to Prime Minister Narendra Modi and Union Home Minister Amit Shah on the phone and informed them about the dam. It is being told that another way has also been made to drain the water, the drainage of water has started from that too.

Rain alert was issued today
Let us tell you that the canal was being dug to empty the Karam Dam, but due to the arrival of the rock, there were a lot of problems in the excavation work. In such a situation, later an alternate route has been made, from which water has also started coming out, but it is a matter of concern that today the Meteorological Department has also issued an alert of heavy rain in Dhar district. After which the government has changed the plan to extract water from the dam. The wall of the dam in which water is leaking, it was decided to cut and drain the water. Now the water of the dam is being released from the cut.

CM Shivraj gave information at 12 o’clock in the night
Chief Minister Shivraj Singh Chouhan informed about the whole matter late at night, he told at 12 o’clock that water has started coming out of the dam. Ministers Tulsi Silavat and Rajyavardhan Singh Dattigaon are monitoring the whole matter and are present on the spot.

The CM said that full care is being taken of the machine operators making the way of water drainage. The villages where there was a possibility of water coming, have been completely evacuated. 18 villages have been completely evacuated, no one remains in the village, so the whole team is roaming in the village. Collector, SP, ADM, SDM Tehsildar, Naib Tehsildar as well as Police personnel, Home Guard personnel, SDRF teams, NDRF teams are posted in the Army’s Kalam field.

CM Shivraj gave information to PM and Home Minister
Earlier, Chief Minister Shivraj Singh Chouhan had called Prime Minister Narendra Modi and Union Home Minister Amit Shah yesterday and gave complete information related to Karam Dam. Earlier yesterday, CM Shivraj himself did complete monitoring for the whole day and canceled all his programs. While even today the CM is keeping an eye on the matter.

what is the whole matter
Let us tell you that the dam being built on the Karam river between Bharudpura and Kothida in Dhar started leaking after the leakage on Thursday. Due to this the soil on one side of the dam was also washed away. Later a part of the wall of the dam was broken and fell. Since then, there was a possibility of the dam breaking.

The work of the dam is 75 percent complete. There is a danger that if it rains, the risk of breaking the dam will increase. At the same time, the administration has evacuated 11 villages of Dhar district, as well as 6 villages of Khargone district have also been evacuated. Section 144 has been imposed in the area by the administration. By late night, Ministers Tulsi Silavat and Rajvardhan Singh Dattigaon have also reached the spot.

Chief Minister Shivraj Singh Chouhan is also constantly taking updates about the situation. It is being told that if it rains, the situation may worsen.