HomeIndiaNow Karnataka too gets into language politics ahead of Assembly polls

Now Karnataka too gets into language politics ahead of Assembly polls

Just like in neighbouring Tamil Nadu, even Karnataka has been witnessing sporadic protests on what language activists call “Hindi imposition.” 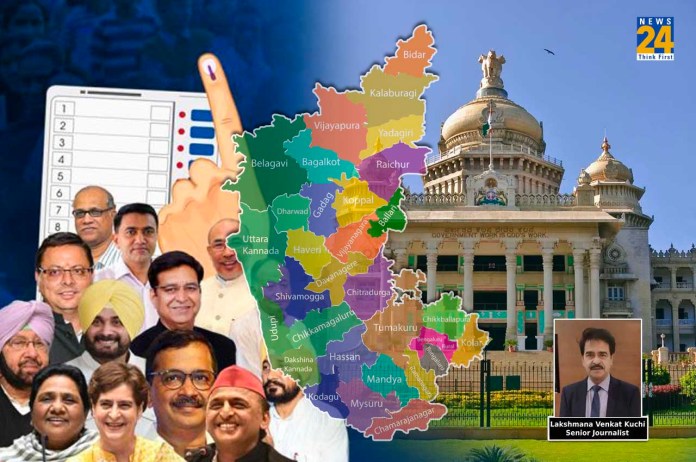 Language issue is alive and kicking, and this time has popped up in poll bound Karnatana with former Chief Minister HD Kumarswamy lobbing it up and hinting that he would be raising the undue importance given to Hindi at the cost of Kannada in the Monsoon session of Assembly beginning soon.

For starters, the former Chief Minister and son of former Prime Minister HD Deve Gowda demanded a halt to the celebration of Hindi Diwas on Wednesday at taxpayers’ expense.

Now the timing and importance given to the issue is significant and also because it is seen as an attempt to whip up an emotional issue for use in elections.

Kumarswamy tried to tried to equate celebrating only one language – Hindi – to insulting local Kannada language, and other Indian languages and sought scrapping of this practice altogether, in a letter to Chief Minister Basavraj Bommai.

“Celebrating Hindi Diwas will be disrespectful of Kannada people,” Kumaraswamy said and added, “As India is a multilingual country, celebrating only Hindi is against national integrity.” Don’t use tax money given by the people of our state to celebrate Hindi Diwas, the former CM said in a bid to whip up passions on an emotive issue ahead of assembly elections.

“Celebrating the Union government-sponsored Hindi Diwas programme on September 14, forcefully in Karnataka, will be an injustice to Kannadigas by the State government. I urge that for no reason Karnataka government should celebrate Hindi Diwas by utilising the State’s taxpayers’ money,” Kumaraswamy said in his letter. India has thousands of languages and dialects, and diverse social and cultural practices make India a ‘great union’, he said.

“In such a land, celebrating one particular language is injustice,” the former CM said in a bid to raise an emotive issue ahead of elections. He said that there were several issues and pressing problems of the people the government should address and not waste time and money on propagating just one language, which does not do justice to all other Indian languages, Kumaraswamy said.

Just like in neighbouring Tamil Nadu, even Karnataka has been witnessing sporadic protests on what language activists call “Hindi imposition” or forcing non-Hindi people to use Hindi when availing central government services or at banks and post offices and the like. Now, with the BJP clearly identified as a political party from the Hindi belt, it is being targeted by the local political parties in Tamil Nadu, and now even Karnataka.

Cleverly, Kumaraswamy has not mentioned any political party, but it is clear at whom the move is directed.

And Kumaraswamy’s missive has had the desired effect and impact: within minutes the Karnataka Education Minister BC Nagesh, “It is unfortunate that a person who has been the chief minister and his father, the prime minister, is speaking like this. Hindi Diwas has been celebrated since 1949 and if he is opposing it only now it is purely for political gain. If they are ideologically against Hindi Diwas, they should have removed it when Deve Gowda was the Prime Minister.”

But, interestingly the stance of Kumaraswamy was tacitly supported by the Congress, which as a national party takes a cautious stance on the language issues. Priyank Kharge, Congress leader said that no one is against Hindi as a language but there were strong sentiments on the ground when people are forced to use a language, they do not feel the need to. For sure, Janata Dal (S) will raise this issue time and again, and especially in the Monsoon session of assembly that is soon starting, said Kumaraswamy.

It seems that regional parties in the south have identified the language issue as one of the issues that is clearly identified with the BJP and would like to use it now and then in the run up to the elections, to tap into people’s emotions on the subject.

Janata Dal spokesperson Tanveer Ahmed said Kumaraswamy was reflecting the sentiments of 6.4 crore Kannadigas who were proud of their language and culture. The central government trying to impose Hindi on us is totally uncalled for. “We respect every language, but imposition of any language will absolutely be having a devastating effect on our federal system,” he said.

Manila: A powerful typhoon hit the northern Philippines on Sunday and was barrelling across...
Business

New Delhi: This holiday season, India is unlikely to see an energy crisis like...
Lifestyle

New Delhi: Rashmika Mandanna is all set to make her Bollywood debut with Goodbye....
World

Manila: A powerful typhoon hit the northern Philippines on Sunday and was barrelling across...
Business

New Delhi: This holiday season, India is unlikely to see an energy crisis like...
Lifestyle

New Delhi: Rashmika Mandanna is all set to make her Bollywood debut with Goodbye....