Nari Shakti: Women politicians who made an impact ‘Breaking The Bias’ 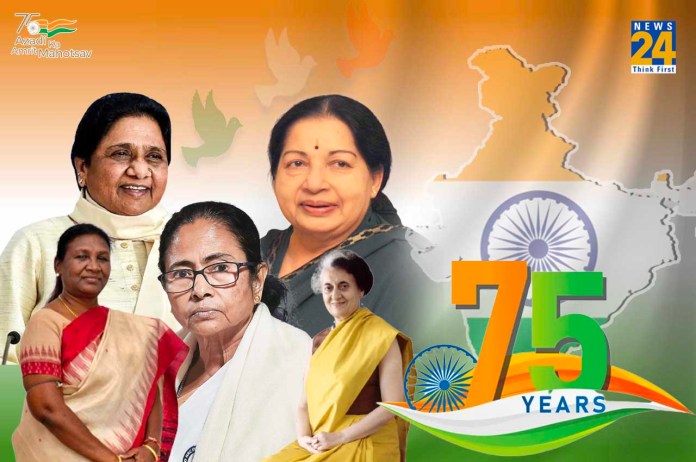 The daughter of India’s first Prime Minister, Indira Gandhi was a key figure in the Indian National Congress. She was elected as India’s third Prime Minister in 1966, and she was the country’s first and only female prime minister. She was the PM from January 1966 to March 1977, and again from January 1980 until her assassination in October 1984, making her the second longest-serving Indian prime minister after her father.

Indira was well-known for her ability to make an impression. In one notable case, upper-caste landowners brutally murdered several Dalits in Bihar’s Belchi. While the ruling patriarchs twiddled their thumbs, Indira Gandhi went to the people, offering first aid and the salve of her helping hand. Indira Gandhi was already in Hermes mode, with wings on her sandals, while the ruling party and others in the Opposition delayed their travel plans.

She set off for Belchi, first by train, then by jeep, then by tractor through the rain, and finally by elephant. ‘I have not come to make speeches; I have come to express my condolences to the bereaved,’ she told the crowd at Bihar Sharif.

Mayawati has been the Chief Minister of Uttar Pradesh four times. She is the national president of the Bahujan Samaj Party (BSP), which promotes a social change platform for Bahujans, also known as Other Backward Castes, Scheduled Castes, and Scheduled Tribes, as well as converted minorities from these castes. She was chief minister for a brief period in 1995 and 1997, then from 2002 to 2003 and again from 2007 to 2012.

Kanshi Ram named Mayawati as his successor in an address to a rally in Lucknow on December 15, 2001.

Millions of Dalits across India regard her as an icon and refer to her as Behen-ji (sister).

Jayalalitha became the first woman leader of the Opposition in the Legislative Assembly of Tamil Nadu in 1989. After winning the assembly elections in 1991, she became the female Chief Minister of Tamil Nadu not to forget that she achieved this in a very young age.

The former Chief Minister worked extensively for the people of the state especially women. Soon after coming into the power, she introduced over 50 police stations that run solely by women. Adding to this, she also introduced a 30% quota for women in police jobs.

Even after many corruption charges following her arrests, Jayalalitha was always respected by her people because of her philanthrophy work. From distributing sanitary napkins to few grams of gold and Rs 50,000 as marriage assistance, she opened Amma’s canteen that offers full meal in Rs 5 only.

In today’s India, Mamata Banerjee seems to be one of the most influential female leaders who went straight against all the political outfits without fear.

Mamata’s influence reflects by the fact that she ended the 34-year reign of the Left in West Bengal. Banerjee had started her career at the age of 15. She, in fact, was solely responsible for forming Trinamool Congress out of Indian National Congress.

In 2002, she became the first woman minister to present the railways budget.

On October 2005, Mamata carried a protest in soaking rain to voice opposition to the violent land seizures and crimes against local farmers carried out in the name of the Buddhadeb Bhattacharjee administration’s industrial development strategy in West Bengal.

India’s President Droupadi Murmu is a courageous and self-righteous woman which highlighted during her tenure as the governor of Jharkhand. President Murmu, then, returned the Bills pertaining to amendments in Chhotanagpur Tenancy (CNT) Act and and Santhal Pargana Tenancy (SPT) Act.

The two Bills sought to legalise commercial use of land of tribals’ while the ownership would remained to the community only.

However, the two bills were highly condmned by tribal communities and activists who believed that the amendments would be against the tribal community.