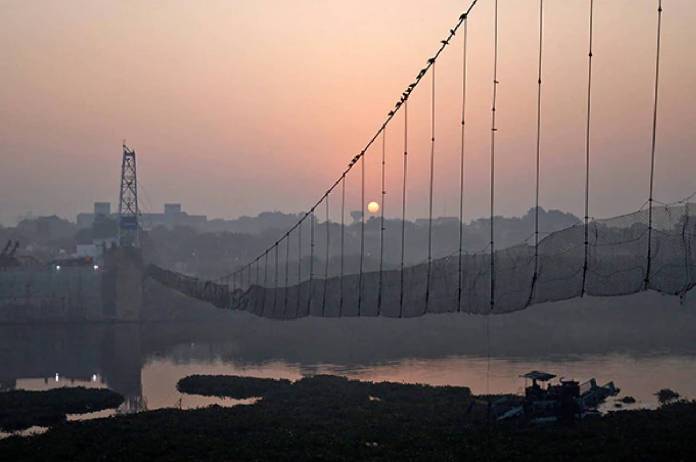 Ahmedabad: A day after it came down heavily at the authorities of civic body in connection with the Morbi Bridge Collapse, the Gujarat High Court on Wednesday asked the latter to file a status report by the evening or pay a hefty fine.

“Stop taking this matter so casually. Either file your affidavit by today evening or pay costs of ₹1 lakh,” said the court.

This comes after no representative of Morbi Municipal Corporation (MMC) appeared before it despite issuing notice already. On Tuesday, the court said the MMC is trying to ‘play smart’ by skipping significant session.

Meanwhile, the lawyer defending the civic body cited that the Deputy Collector who’s in-charge of Morbi Municipal Corporation is on election duty and he never received the notice.

He submitted that the notice was served to the civic body which should have been the case with the Deputy Collector. Hence, the delay.

A hanging bridge in Gujarat’s Morbi town collapsed on October 30 in which 135 people lost their lives. The bridge was a tourist place and it was crowded on the day of incident as it was Sunday.

The Gujarat High Court took suo motto cognisance in the matter on November 7, upon seeing no development in the matter. It has been 17 days since the incident which claimed over hundreds of lives but no stringent action was taken apart from interrogating a few people arrested.

On November 14, the High Court sought direct answers from the state government as well as other concerned departments. The court asked why a private contractor whose license was expired back in 2017, was given the task of refurbishing the Morbi bridge.

Prior to that, one of the accused managers of the Oreva Company responsible to renovate the Morbi Brdige said that the mishap was an “Act of God.”

“One of the two managers of Oreva company (that have been arrested) told the court that it is an ‘Act of God’,” said Additional Public Prosecutor, Advocate HS Panchal.