The Bharatiya Janata Party (BJP) workers thronged at the roads in Jaipur to protest against the Ashok Gehlot-led Rajasthan government. 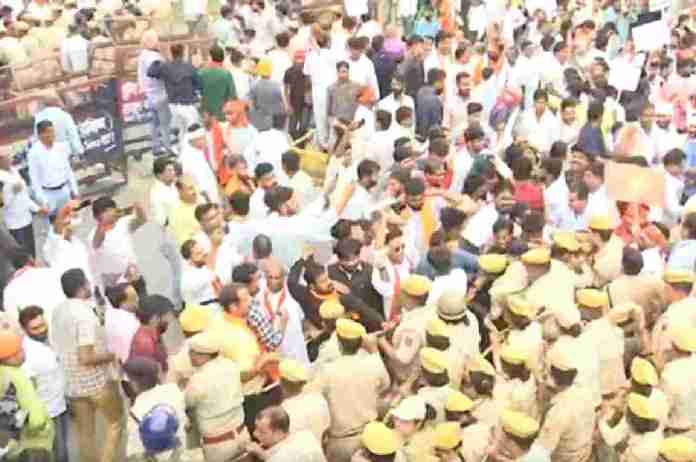 Jaipur: The Bharatiya Janata Party (BJP) workers thronged at the roads in Jaipur to protest against the Ashok Gehlot-led Rajasthan government. The saffron party has held the state government responsible for mass cattle deaths due to Lumpy virus.

During the protest, Rajasthan BJP chief Satish Poonia even climbed atop a police barricade in Jaipur.

Earlier, in an unusual incident on Monday, Pushkar BJP MLA Suresh Rawat reached the Rajasthan Assembly along with a cow. The act was carried out with the aim to protest against the spread of Lumpy disease in livestock.

#WATCH | A huge crowd of BJP members gather in protest in Rajasthan’s Jaipur over the death of thousands of cattle in the state due to lumpy skin disease pic.twitter.com/8WpMtW3n1O

As soon as the BJP MLA reached the spot and started giving a statement, the cow ran away.

On September 19, Rajasthan Chief Minister took note of the issue and said that the addressal of the lumpy disease is the state government’s priority however the vaccines for the same would be given by the Centre.

“I called a meeting on August 15 regarding lumpy skin disease and called the leaders of the opposition, talked to everyone, talked to the religious leaders, our priority is how to save the lives of cows from lumpy skin disease, but the central government will give the vaccines and medicines,” tweeted CM Gehlot.

The disease had been ravaging cattle across the country with cows from Maharashtra, Gujarat, Madhya Pradesh, and Punjab dying in large numbers.

As per reports, Lumpy disease is a viral disease that affects cattle. It is transmitted by blood-feeding insects, such as certain species of flies and mosquitoes, or ticks. It causes fever and nodules on the skin and can lead to the death of the cattle.