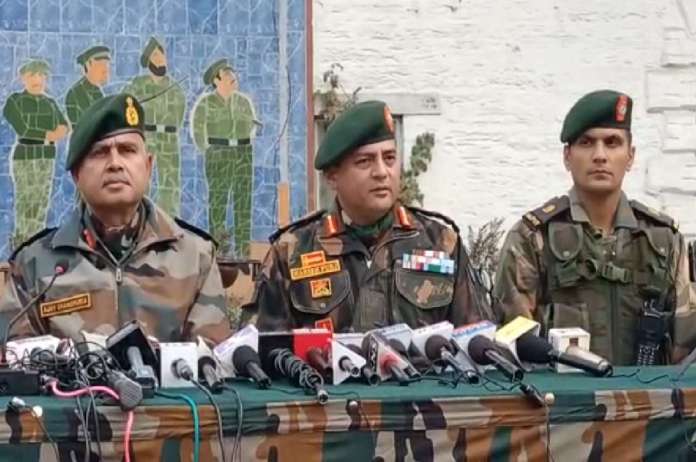 Aasif Suhaf, Srinagar: In a major successful operation against terrorist activities, Indian army along with Jammu and Kashmir Police recovered huge cache of arms and ammunition in Hathlanga Nala area of LOC in URI North Kashmir.

Army Commander URI brigade along with SSP Baramulla while addressing a Press Conference in URI said that, while acting upon a specific information the army and Police during a joint operation recovered huge cache of arms and ammunition from Hathlanga Nallah, LOC sector of Uri. Army Commander said that the Hathlanga Nallah area is part of Hathlanga village where around 50 residential houses are situated just a kilometer away from exact LOC.

Another army officer while addressing press conference said that following continuous intelligence inputs about the possible infiltration of terrorists from across the LOC in POK, the army along with J&K Police had launched massive search operations and ambushes in the General area of Hathlanga area and other areas where on the opposite site terrorist activities were picked up by army’s latest anti infiltration gadgets installed in LOC area.

Army commander said that, yesterday there was a huge for and cloudy weather in this area but joint team of army and police continued there search operation in Hathlanga area and in a successful operation recovered huge cache of arms, ammunition which includes 8 AK74u, 24 AK 74 Magazines, 12 Chinese Pistols, 24 pistol magazines, 9 Chinese grenades, 5 Pak Grenades, 5 wheat bags, 81 Pak Balloons, 560 rounds of AK Rifle and 244 rounds of pistol.

Meanwhile a case has been registered in this regard and further investigations have been taken up to find out terrorists who had dumped huge cache of arms and ammunition in the LOC area.