Is BJP signing up RRR star, Junior NTR for a political role in Andhra & Telangana? 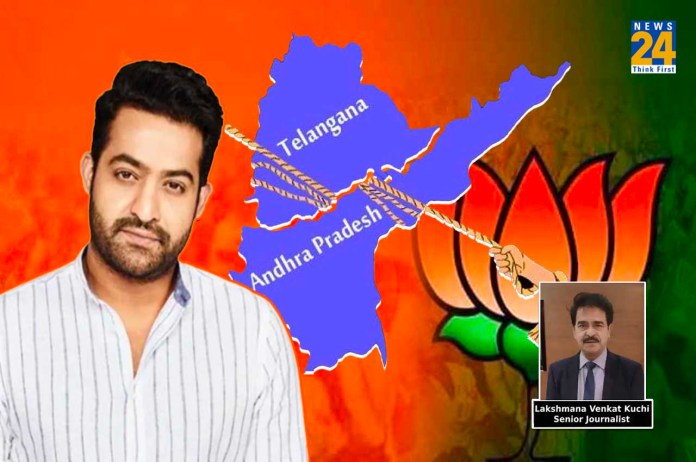 Now in an overdrive in South India, including in the two Telugu speaking states of Telangana and Andhra Pradesh, the BJP has deployed its top leaders to create a favourable environment for it ahead of the general elections to the assemblies there to be held in less than a year. These two states send 42 MPs to Lok Sabha and at present the BJP has only four.

Its 2024 plan includes a sharper focus on South India that elects 130 MPs, and which is why, growing in these virgin lands is high on the party’s agenda. In Telangana, the BJP has brighter chances given its victory in four Lok Sabha seats in the 2019 general elections, and its recent impressive showing in the greater Hyderabad municipal elections. Sensing an opportunity here, and in neighbouring Andhra Pradesh, the BJP has stepped up its activity on the ground – as a visible opposition party.

Roping in well-known people into the party fold – from the bureaucracy and police – and enlisting support from the film world form part of the BJP’s s strategy to accelerate growth in these two film-crazed states. In this connection, a very important meeting of Union Home Minister, Amit Shah, with RRR star and superstar Junior NTR, the grandson of legendary NT Rama Rao, the founder of TDP, at Hyderabad the other day has created a huge buzz in film and political circles of the state.

Though local BJP leaders do not attach political significance to this nearly one-hour long meeting, it has sent a message to the masses, at least to the followers of NTR. Associations like these help in building up and add to the overall image of a party, said a political observer who however doubted the ability of film stars in current day politics in Andhra Pradesh and Telangana.

It may be recalled that the legendary NT Rama Rao, the superstar of yesteryears in Telugu cinema, ousted the Congress from its bastion of Andhra Pradesh (combined) in just nine months after launching a political party, the Telugu Desam Party. Born into a political family, Junior NTR, could well be entertaining the idea of entering politics and may be looking at his options.

An extremely successful film star, Junior NTR, is very popular in both the Telugu-speaking states and could be a charismatic crowd puller for the BJP, which was lacking charismatic leaders in the two states to take on the established political entities – Jaganmohan Reddy in Andhra Pradesh and K Chandrashekhara Rao in Telangana.

A former state minister and YSRCP MLA Kodali Naani said it was clear that the BJP was looking at popular names in the film-crazed Telugu speaking states, and who better than NTR – who could also be used for canvassing across India given that his films dubbed in Hindi  do well on TV channels and OTT platforms.

His most recent starrer, RRR, became a runaway hit across the Hindi belt as well.

The YSRCP MLA lent credence to speculations in the film and political circles about Junior NTR and Amit Shah meeting. “Unless there was a significant political gain, neither the PM nor Amit Shah spend time with anyone,” the YSRCP MLA told media persons. He is sure, as are few political analysts, that NTR could be ‘signing up’ for a political role in real life – with the biggest political party that promises success at the election box-office.

Incidentally, Amit Shah launched into a frontal attack against KCR and his family in Telangana during a rally he addressed as part of campaigning for Munugode, a key assembly byelection in Telangana. Local BJP leaders also link KCR’s daughter Kavitha to the Delhi liquor scam in which Delhi Deputy Chief Minister Manish Sisodia is the prime accused. In Andhra Pradesh, Union Minister Anurag Thakur attacked Chief Minister Jaganmohan Reddy for all round failure and alleged that it was liquor, land and sand mafia that ran the Andhra Government.

It is interesting that at a time when an influential union minister was attacking the Chief Minister, Jaganmohan Reddy was meeting Prime Minister Narendra Modi in Delhi on Monday.