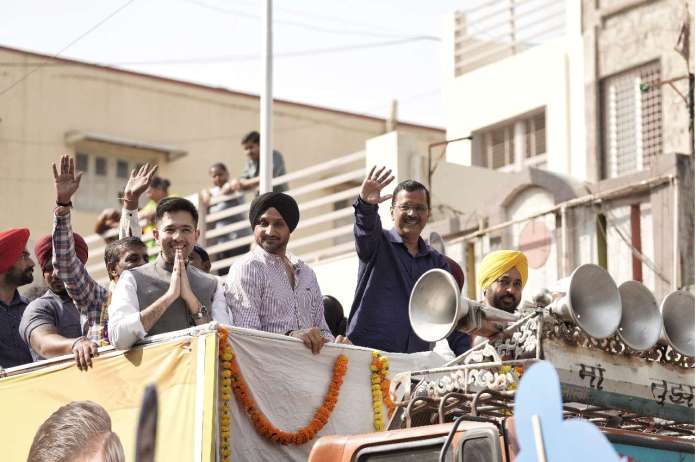 After a highly successful first phase of campaigning, the Aam Aadmi Party has unleashed its star-power for the second leg of Gujarat Polls. AAP National Convenor and Delhi CM Shri Arvind Kejriwal took out a massive roadshow in Ahmedabad on Thursday with Punjab CM Sardar Bhagwant Mann and AAP MPs Sardar Harbhajan Singh & Shri Raghav Chadha by his side. Leaving no stone unturned in its bid for the state assembly elections, Ahmedabad saw the party put in all its might in the campaign, with tens of thousands of citizens on the ground flanking the AAP cavalcade as it passed through the town. Shri Arvind Kejriwal said, “AAP Government will ensure savings of Rs 30,000 per month for every household in Gujarat; appeal to the whole of Gujarat to vote for AAP. No point voting for BJP unless you want another 5 years of harassment and humiliation. We will give free electricity, Rs 1,000 per month to women, prevent fee hikes in private schools, ensure employment for all and allowance for the unemployed. BJP has no plan for inflation and unemployment; if you ask them for an account of 27 years, they start hurling abuses at Kejriwal. Will abusing Kejriwal bring employment? Will abusing Kejriwal feed hungry stomachs? The society will tread ahead only when the youth starts earning for themselves. Till now Gujarat had to hopscotch between two parties; BJP-Congress work like one family, now the Lord has given Gujarat a chance, this a divine call for change.”

Ahmedabad saw an overwhelming show of support by the local residents for the Aam Aadmi Party. Giving credence to his merit, AAP National Convenor and Delhi CM Shri Arvind Kejriwal brought along thousands of zero-charge electricity bills from Punjab to his roadshow. He distributed the bills among the locals and asked them to see the reality themselves. He said, “When I landed at the airport I met a man who said he won’t vote for BJP anymore. I asked why. He said that there is no point voting for them anymore, at least AAP will give free electricity. Then a woman walking here said she’ll vote for AAP because AAP will give women Rs 1000 every month. Then the father of a child said AAP won’t let private schools hike fees, so he’ll vote for us. Every family will save Rs 30,000 every month if you elect AAP to power. But on the contrary you’ll only spend more out of your pocket if you vote for the BJP. This election is a chance to push for a revolution. This election can change the future of Gujarat and the whole of India. Till now Gujarat had no option how to hopscotch between these two parties. Today you have a viable alternative in the form of AAP. This is nature’s calling, this the Lord’s way of inflicting change, come together and put the AAP into power.”

He added, “I have criss-crossed through the length and breadth of Gujarat. The whole of Gujarat is plagued by inflation and unemployment. In most of the families, the male goes out and earns money for the house. He then hands over the money for household expenses to the women of the house. In 15 days all the money runs out in expenses. It gets difficult to manage the household. This is why we have formulated three guarantees keeping women in the focus. We will give you free electricity. We will give women Rs 1,000 every month. If there are three women in the house it totals to 3,000 per month. We will not let any private schools hike their fees for the next five years. We did this in Delhi too. No private school has been allowed to hike fees for the last seven years.”

BJP won’t bring employment, it is time for change, press the Jhaadu button and embark on the AAP revolution: Arvind Kejriwal

He continued, “I see crowds of young men roaming aimlessly in Gujarat. They are all victims of paper leaks. These BJP people, their leaders don’t care for you. They are all equal culprits in the sale of leaked papers. Once we come to power we will not let a single paper get leaked and complete all government recruitments within one year. We will arrange employment for every youth. And till the time one remains unemployed they will get an allowance from the government. Today the BJP has no plan for Gujarat. When you ask the BJP what they did in the last 27 years, they start hurling abuses at me. Will abusing Kejriwal bring employment? Will abusing Kejriwal feed hungry stomachs? The society will tread ahead only when the youth starts earning for themselves. BJP won’t bring employment, it is time for change, press the Jhaadu button and embark on the AAP revolution.”

Kejriwal Model engine has come to the market; Gujarat does not need a double engine anymore: Bhagwant Mann

Punjab CM Sardar Bhagwant Mann said, “Wherever we went in Gujarat, our convoy kept on getting bigger day by day. A miracle will happen in Gujarat on December 8 and the Aam Aadmi Party government will be formed. For the last 27 years, the leaders used to win and the people of Gujarat used to lose, but on December 8, the people of Gujarat will win and all these big leaders will lose. We will build government schools. Electricity will be free from March 1. Government hospitals will be built and not a single paper will be allowed to leak. Only those youths who will come in merit, will get jobs. We don’t do jumlabaazi. We have proven our merit in Delhi and Punjab. I have given government jobs to 20,557 youths in Punjab in the last 8 months. Shri Arvind Kejriwal has given employment to 12 lakh youths in Delhi in the last 6 years. We do not sell fake promises like 15 lakh rupees will come in your account magically. I don’t know at all when ‘achhe din’ will come, but I know for sure that on 8th December, an honest government with Shri Arvind Kejriwal is going to come in Gujarat. They talk of a double engine government. Gujarat needs a new engine, not a double engine. The Kejriwal Model engine has come to the market. It is electric, it runs fast.”

AAP Rajya Sabha MP Shri Raghav Chadha said, “Wherever the Aam Aadmi Party is going in the whole of Gujarat, only one slogan is heard that is “Kejriwal Aave Chhe – Badlaav Laave Chhe”. Come vote for change this time. In Gujarat too, like Delhi and Punjab all families will get free electricity, everyone will get world class education, good treatment. Magnificent hospitals and Mohalla clinics will be built in Gujarat. The AAP Government of Gujarat will provide financial assistance of one thousand each to all women every month. We will give employment to all the youth of Gujarat and till there is no employment, they will get an unemployment allowance of Rs 3,000 each. Uproot the 27 year old arrogant and corrupt BJP government and form the Aam Aadmi Party government. I want to tell the youth of Gujarat that ever since you regained your senses, you have seen the government of only one party. There has only been one party government for 27 years. If you wear the same colour shirt for 27 years, then a person gets bored with that shirt too. Vote for the Aam Aadmi Party this time and form the Aam Aadmi Party government in Gujarat with a huge majority like Delhi-Punjab.”

I hope that we will be able to serve you and be of some use to you: Harbhajan Singh

At the same time, AAP Rajya Sabha MP Sardar Harbhajan Singh said, “What does Gujarat need? Gujarat needs “Parivartan”. The love you have given me while playing, I would like to get the same love again. Show us the same kind of love in the elections now. I hope that we will be able to serve you and be of some use to you.”