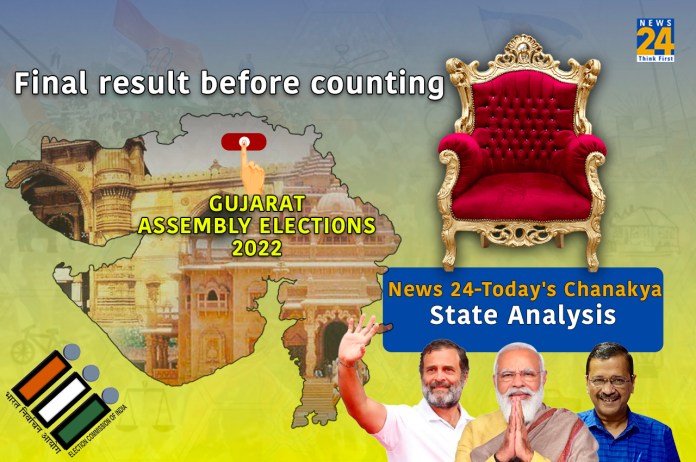 Gujarat Exit Polls 2022:  Is BJP once again forming government in Gujarat! Gujarat’s election seems be in BJP’s favour. According to the estimates, BJP is moving towards forming the government for the 7th time in a row. In five major exit polls, BJP is seen getting more than 100 seats.

According to the exit polls, this time also Congress will sit in the assembly as the main opposition party while Aam Aadmi Party (AAP) has not been able to repeat the magic of Delhi and Punjab in Gujarat. 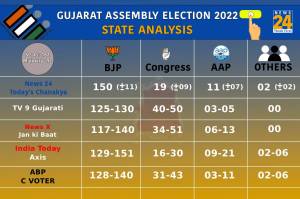 What the major exit polls say….

TV9 has predicted BJP to get 125-130 seats in Gujarat poll. At the same time, Congress has been placed at number two. Congress is getting 40-50 seats in TV9 exit polls. Aam Aadmi Party (AAP) is getting 03-05 seats while others are getting 03 to 07 seats.

In the exit poll of Jan Ki Baat, BJP has been predicted to get 117-140 seats. At the same time, Congress has been placed at number two. Congress is getting 34-51 seats in Jan Ki Baat exit polls. AAP is seen getting 06-13 seats.

The exit poll of Axis My India has projected 129-151 seats for the BJP. At the same time, Congress has been placed at number two. Congress seems to get 16-30 seats. AAP is seen getting 09-21 seats while others are getting 02 to 06.

Most reliable results preview on News24

The results of Gujarat and Himachal Pradesh assembly will come on December 8, 2022, but its most reliable glimpse will start appearing from 4 pm today. News 24 will tell you what the Gujarti voters’ have opted for.

News24-Today’s Chanakya will present a picture of the future of both the states in front of the country from 4 pm onwards with accurate estimation of vote share and seats of all political parties of Gujarat.

Prediction proved true in UP, Uttarakhand and Punjab

The predictions of News 24 and Today’s Chanakya proved to be absolutely accurate during the Uttar Pradesh, Uttarakhand and Punjab assembly elections in February-March this year. In the last 15 years, News24-Today’s Chanakya had predicted the results of every major election one after the other.

People with even an iota of interest in electoral politics always trust Today’s Chanakya’s exit poll predictions and News 24’s accurate analysis ahead of elections. The exit poll of News 24-Today’s Chanakya is eagerly awaited in political circles.

Voting for the second phase ended on 93 seats today

A picture will emerge from the results of exit polls of who is likely to form the government in Gujarat. Voting for the second phase of Gujarat assembly elections is over. Voting took place today for 93 seats in the second phase. Voters have decided the fate of 833 candidates.

The first phase of elections was held on December 1 for 89 seats spread over 19 districts in Saurashtra-Kutch and southern parts of the state.

What were the results last time?

In the 2017 elections, the BJP won 99 out of 182 seats in the Gujarat Legislative Assembly. Congress got 77 seats. After the election, BJP made Vijay Rupani the Chief Minister. Then, in a leadership change in 2021, the BJP replaced Rupani with Bhupendra Patel as the chief minister.