With the JD (S) still an active regional players within Karnataka, chances are that it could emerge as a king-maker who might insist on being the King. 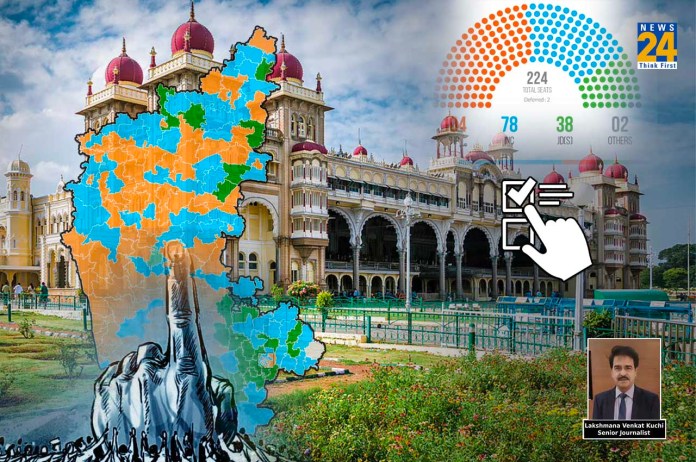 Karnataka poll planks are more or less settled in the run up yo assembly elections due next year — Communalism,  and Corruption are pitted against each other with shades of  regionalism stoked by a  Karnataka regional party. The way strengths of the three key players — ruling BJP, opposition Congress and regional force Janata Dal (Secular)  are stacked, a repeat of 2017 verdict appears more than likely.

A fractured verdict with smaller regional force emerging as the king maker like it happened last time around.  Different surveys conducted by local organisations predict an action replay of 2017 poll outcome. Unless some game changing political event takes place.

Another  variable this time could be the entry of Aam Aadmi Party and it remains to be seen as to whose fortunes it would hurt more — the BJP or the Congress.

For the ruling BJP, the tagline from Congress – “Forty Percent Commission Government” to describe the Basavaraj Bommai government has struck a chord among the people, at the receiving end what with unabated price rise, unemployment and livelihood problem continuing to afflict them.

For the BJP, its gateway to South, Karnataka is very important as it had also swept 25 out of total 28 Lok Sabha seats in the 2019 general elections and would like to retain its hold even as it uses the state as a springboard for expansion in South India.

The ruling BJP, which has had tried to communalise the situation for the past many months – with Hijab controversy, move to boycott of Muslim traders near temples, Savarkar controversy, text book revisions and the like may not have entirely set the electorate on fire. Possible reducing marginal utility of Hindutva as an election agenda – especially in the wake of corruption charges sticking to the Bommai government, the ruling BJP is said to be reviving its attack on Corruption in the Congress ranks. The Enforcement directorate summons to state Congress chief DK Shivakumar is a case in point, as periodic investigations and questioning keeps the issue alive in the minds of the people.

But, political analysts now wonder if investigations and raids by central agencies will fetch the desired results for the ruling dispensation as people have gotten wiser, thanks to the social media and the excessive use of agencies with monotonous regularity. “In fact, people now expect the central agencies to get active, once elections are round the corner with raids on opposition happening routinely,” said a professor in a media college requesting anonymity.

The Congress has more or less finalised its focus of attack, playing upon the 40 percent commission barb that has become very popular and reached every nook and corner in the state, thanks to the local television channels and Kannada media. With the Congress and Janata Dal (S) also having some hold in the media, unlike in some parts of north India, they are able to convey their message to the masses more effectively and giving the BJP a run for its money, said an academician from the media studies.

As the ruling party and principal opposition party are thus engaged, the third force in Karnataka politics is quietly stoking regional issues – especially the issue of imposition of Hindi that is slowly finding resonance in the state, with several Kannada activists coming in support of Janata Dal (Secular)’s call of boycott of Hindi Diwas celebrations. Now, the BJP may dismiss the Hindi issue of no consequence, going by the sudden shrillness with which Kannada activists are opposing what is being perceived as Hindi imposition – and if the JD (S) manages to whip up the issue and link it to federalism and rights of the state being encroached upon, something that neighbouring Telangana leadership is doing, it may well have a potent poll campaign going.

With the JD (S) still an active regional players within Karnataka, chances are that it could emerge as a king-maker who might insist on being the King in the eventuality that neither the BJP nor the Congress get an outright majority of their own. However, more developments are likely between now and the polls, with another player, the Aam Aadmi Party waiting to enter the arena to alter the equations on the ground.

At present busy with Himachal Pradesh and Gujarat, the AAP is already netting people in Karnataka. A former active and effective Congress leader Brajesh Kallappa, who was a combative spokesperson for the Congress, has called it quits and joined the AAP. “Many more are likely to leave the party,” he forecast. It remains to be seen as to which party the AAP would hurt more – the Congress, the BJP or the regional party, JD (S).