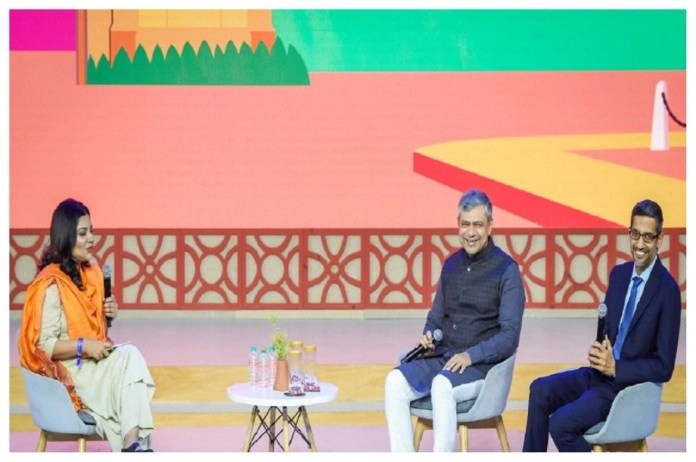 New Delhi: In a major push for AI (Artificial Intelligence) in India, Google on Monday announced AI-based initiatives aimed at addressing the language divide on the Internet, supporting the digitisation of farmland in partnership with the Telangana Government, and new collaborations and investments to drive responsible development of AI across the country.

The company’s CEO Sundar Pichai on Monday attended ‘Google for India 2022’ at Delhi’s Pragati Maidan. During this, he made many big announcements regarding the company’s future plans.

So great to be back in India! At #GoogleForIndia, we introduced a multimodal AI model that covers 100+ Indian languages, ML-powered bilingual search results pages (launching in India first), support for a new center for responsible AI @iitmadras + more. https://t.co/coCT8fbR9X

Union Minister of Electronics and Information Technology Ashwini Vaishnaw was also present at the event. There was a discussion between Pichai and Vaishnav about AI and AI based solutions in India. After this, Pichai shared information about the upcoming big features of Google.

The move is aimed at collecting and transcribing open source speech data from across all of India’s 773 districts, making it available through the Centre’s ‘Bhashini’ project in the future, the company said during its annual flagship ‘Google For India’ event in New Delhi on Monday.

“As access continues to broaden, connectivity must become rewarding for all people everywhere, and enable everyone to seamlessly move up the digital value chain for individual progress. We’re excited to launch concerted efforts with AI to democratize this opportunity and solve for languages, security, and transformation of scaled sectors such as agriculture and healthcare,” Gupta said, adding that under the Google for India Digitization fund, it will continue to support the innovation ecosystem with a commitment to support early-stage and women-led start-ups.

The tech giant also announced new innovations across Search, focusing on bilingual users’ needs and new search capabilities using camera and voice; a new fraud detection model for secure digital payments on Google Pay; and integration with Digilocker in the Files by Google app on Android to allow for easy access to key digital documents, privately and safely.

“We look forward to working closely with our ecosystem partners as we continue to responsibly deploy Google’s AI and Machine Learning innovations towards answering big societal needs – from democratizing access to information by enabling more inclusive and powerful Indian language capabilities, to working with the Telangana state government to utilize remote sensing for a deeper understanding of India’s farmlands, to helping digitize medical prescriptions by way of an assistive tool which can be used on a smartphone,” said Manish Gupta, Director-Research, Google India.

At the event, Liz Reid, Vice President, of Google Search said that the investments for over a decade have helped it take consistent strides towards building a search experience that’s accessible and useful to everyone in India.

“Today, India is at the forefront of visual and voice search adoption, consuming content in different languages, and there is still tremendous opportunity to meet people’s information needs. With advances in AI, we’re making search more helpful than ever by introducing new India-first and India-focused innovations that enable more people to navigate the internet in ways that are most natural and intuitive to them,” Reid added.

The company also announced a new $1 million grant via Google.Org to Wadhwani AI towards using advanced technology for better agricultural outcomes. Google has been piloting ‘Project Relate’ – an app that is trained to unique speech patterns of people with non-standard speech.

The company has been piloting the app with English users in India and will expand this to Hindi users in early 2023. Google also announced a collaboration with the National eGovernance Division (NeGD) to enable people with easy access to their authentic digital documents, directly from the Files by Google app on Android.